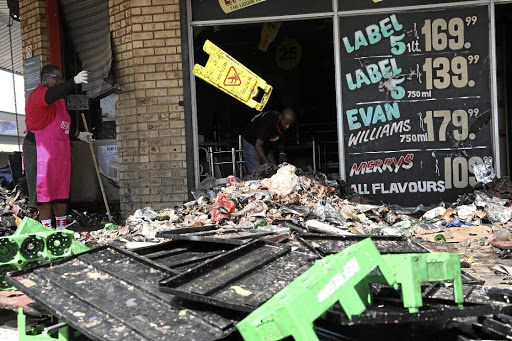 Liquor City at Sontonga Mall in Katlehong was one of many shops looted overnight as violence towards foreign-owned shops spread to Ekhuruleni.
Image: Thulani Mbele

Frantic parents rushed to pick up their children from Gauteng schools yesterday after rumours spread that they were being abducted.

In the early hours of yesterday, rumours surfaced that pupils were being kidnapped by foreign nationals in Katlehong, Ekurhuleni, in retaliation for the looting of their shops.

These messages spread out like wild fires to other areas in Ekurhuleni such as Reiger Park and Wadeville.

To make matters worse, there was a woman in metro police uniform who shared a video on Twitter, calling on parents to fetch their children from schools as Pakistan nationals were headed there.

In the background, a group of people who looked like parents could be seen trying to gain access at a school and save their children.

As the fake news gained traction, parents panicked and rushed to fetch their children whom they thought faced danger.

By the time education MEC Panyaza Lesufi rejected the rumours on social media, it was a little too late as they had already had spread too wide.

A total of 13 schools saw parents come to fetch their children as they feared they were being attacked. There were also rumours of schools being set alight.

A principal at a primary school in Reiger Park detailed to Sowetan how things simply got out of hand as parents stormed the school to take their children home.

Large food retailer Shoprite has condemned violent attacks on foreign nationals and businesses on the African continent.
Business
2 years ago

"Before we knew it, there were hundreds of parents at the gate to take their children. I explained that somebody must be spreading these fake messages and it was causing panic," the principal said.

The principal, who could not be named as he is not authorised to speak to the media, said he allowed all the parents to take their children home.

Lesufi later visited Lungisani Primary School in Katlehong which was one of the facilities said to be engulfed by flames.

"We are indeed disturbed and worried that these things are now spreading towards the education space when it's at a sensitive stage," Lesufi said. "We are preparing for preliminary exams, all these things are honestly unwarranted. People spread rumours that parents must rush to all schools to fetch children and that there are people moving towards our schools to remove children which are false."

'This is not the SA we fought for'

Machel relives how her daughter was GBV victim.
News
2 years ago

While the east of Gauteng had schools in panic, residents in Tshwane were in panic over a false message which suggested that taxi associations would meet in Marabastad and head to Sunnyside to deal with criminality in the city.

Meanwhile, the looting of shops which started on Sunday night, continued on the East Rand. Shops, some owned by locals, at Sontonga Mall in Katlehong, and Thokoza, were looted.

Police stretched thin as they responded to sporadic looting incidents in Ekurhuleni.

A total of 289 people had been arrested since the outbreak of looting in Gauteng. Five people have been killed as a result of clashes between locals and foreign shop owners.

In times where the country is gripped by horrific stories we are more likely to succumb to fake news stories and fake images.

Sometimes images can be traced to completely unrelated events are used to cause more damage than good. Easy access to social media has allowed for fake news to be spread easily without any verification.

Here are four apps that we can use to trace fake photos:

This app allows users to upload a picture or a URL to trace where else it appears online. The app also allows users to create a database of pictures to be alerted if your pictures have been re-used or duplicated.

This app stays true to its name. It allows you to reverse image search to find where a picture is originated from. This is nifty for anyone who is suspecting that they are being catfished.

With this app, the user can take a picture with their mobile phone and have immediate access to related images. The relevant information about the picture will also accompany the results.

This tool allows you to put in the picture url to find similar images on the net. The user is able to find out if a picture has been plagiarised and where the original source is from.