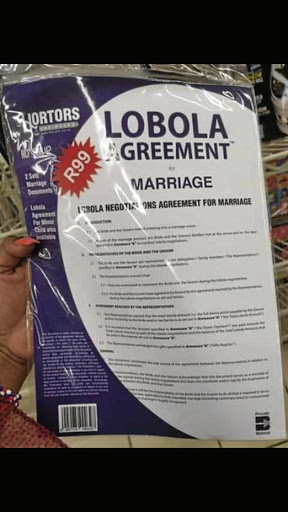 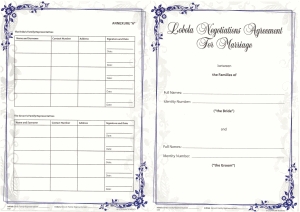 Have you ever been involved in lobolo negotiations where everything in the end seemed delayed because somebody has to write down what the families agreed to? What about those complex discussions deciding on what a man should pay for impregnating a woman out of wedlock?

Well, there is now a solution that comes as a standardised form where you feel up the key details of the agreement. Don't be scared by its front page logo, although it bears the emblem of Bidvest - seen in some quarters as a symbol of "white monopoly capital"- the idea and the business is owned by a black guy from Sharpeville.

Jabulani Mahlangu had participated in at least five lobolo negotiations when he saw a gap in the market for his product.

"Every time we negotiate with different families somebody had to do the recording of the agreement between the parties. In one of the cases I asked the elders that I should write the agreement while they are having food. But I then thought to myself that elsewhere in KZN, Limpopo and Eastern Cape, people are in the same situation as myself but what are they writing," he said.

"Every African marriage begins at this point. I felt that the coming together of families is an important milestone between the two families because they are coming to create a life-long relationship.

"Can't we dignify this coming together with a decent document, not just a piece of paper taken from a scrap book that is no longer used by children?"

Mahlangu then sat down and put the document together and later took it to a law firm to test if his innovation could stand in a court of law.

He then approached Hortors, a stationery company owned by Bidvest and was able to forge a partnership. He also approached Shoprite as the biggest supermarket and they too came on board.

On Monday, the Lobola Negotiations Agreement For Marriage hit Shoprite shelves at just R100. In the document, there are spaces to fill the full names and ID numbers of the bride and groom and those representing each side, their contact numbers, address and signatures.

In 2004, the Sunday Times reported about Mpho Lebogo who invented a similar document. Lebogo's document is still available online for R300.

Mahlangu has also developed another document for the penalty of impregnating a woman out of wedlock.

It will be released later.