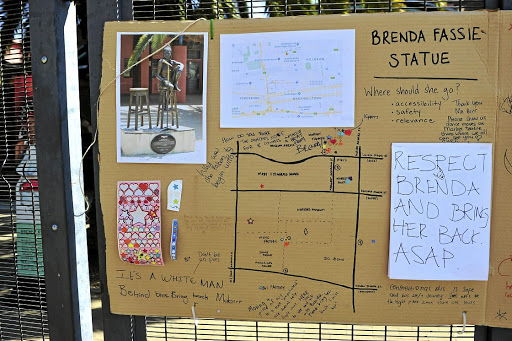 The popular Brenda Fassie statue in Newtown, Joburg, has been removed for repairs. /TSHEKO KABASIA

Many people have been left confused and upset after the historic Brenda Fassie sculpture in Newton, Johannesburg, mysteriously vanished.

The 570-metre life-size bronze statue of Mabrrr sitting on a stool behind a microphone was stationed outside Newtown Music Factory (formerly Bassline).

The sculpture was created in 2006 as part of the Sunday Times Heritage Project to mark the 100th year anniversary of the newspaper.

The statue was taken down on Saturday.

While the unannounced disappearance has left many unimpressed, the City of Johannesburg yesterday explained to Sowetan that the statue has been taken for repairs.

"Where the statue will be erected around Johannesburg after the repair is up to the public [to decide]," City spokesperson Nthatisi Modingoane said yesterday.

"The city can confirm that Brenda Fassie statue has been removed for repairs.

"A public participation process will be undertaken where members of the public's views will be sought on the appropriate location for the statue once repaired."

A board with a map of the city's hot tourist attractions has been placed outside Newtown Music Factory, asking passers-by to suggest where the statue should go upon return.

People are urged to consider accessibility, security and relevance in their selection.

"Where should she (Brenda Fassie) go next?" a question is posed on the board. Some of the suggested spots include Constitution Hill, the Joburg Theatre and Mary Fitzgerald Square.

An overwhelming number of the responses have been that the sculpture should be returned. "Respect Brenda Fassie and bring her back ASAP," one message reads.

"Moving a piece of art to a more populated area doesn't help. People come here to see and sit with Brenda. Please bring her back. I miss her," one plea points out.

"Constitution Hill is safe and has 24/7 security. It will be the right place since there are tours," another person opines.