Zama zamas get legal rights to mine 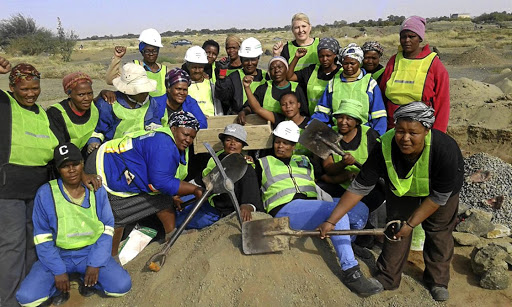 A group of women in Kimberley, Northern Cape, who were illegal miners have transformed their lives by registering a cooperative which enables them to deal in diamonds legally. /SUPPLIED

A group of 200 women who have registered a small-scale mining cooperative are looking forward to making a name for themselves.

The women, who worked as illegal miners in Kimberley in Northern Cape for six years mining diamonds, were granted a permit to start small-scale mining two months ago.

One of the women Elisa Louw said their lives will change for the better as they start a new journey as legal artisan miners. The women were assisted by Michelle
Goliath, a PhD student in the department of Urban and Regional Planning at University of Free State. She helped them register the Women in Artisanal Scale Mining.

Louw, 49, a mother of three, said she became an illegal miner in 2013 after she left her job as a domestic worker.

"I'm happy that we can work freely without worrying that the police would confiscate our goods. Though we sell diamonds, we encourage women to be more independent by empowering them to do other things such as creating a ring from the diamond," she said.

Another body found near mine shaft
News
3 years ago

Louw said the women come from all over the country and through the artisanal small-scale mining they will also be trained in computer literacy.

"All these women want to change their lives for the better. When I started in 2013 I knew nothing about mines and I did not even have the required tools," she said.

"I sold my first 75-pointer diamond for R1,500 in the black market, but these days we are doing everything legally."

Realising their struggle, Louw said she recruited other women to register and obtain legal mining permits.

Community now fear for their lives
News
3 years ago

"People did not understand what it meant to be legalised. By the end of 2016 we had established the Batho Pele Primary Mining Cooperative, but we struggled to get the permit which was issued a year later when we met Goliath.

Goliath said her research included "Zamaism" psychology, a philosophy which looked at the contestation of space and rules and how people navigate illegal mining when they are faced with desperate choices.

"I negotiated an agreement with private mining and public sector stakeholders to include the zama zamas as legal artisan miners in the formal mining economy." she said.

She said the two cooperatives they created, Batho Pele Primary Mining Cooperative and the Women in Artisanal Scale Mining, have signed agreements with Canada and the US for the export of fair trade certified gem products.