Cheryl Zondi may have to retell her ordeal 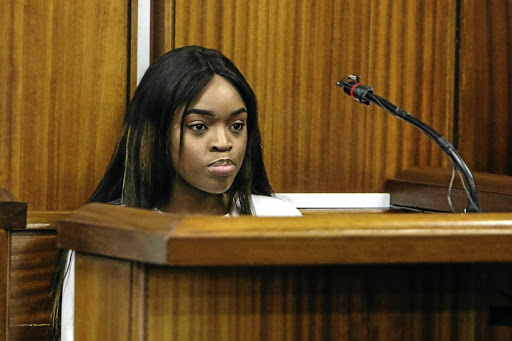 Cheryl Zondi will likely have to repeat her testimony in the rape trial of pastor Tim Omotoso after Judge Mandela Makaula recused himself from the case to avoid future perceptions of bias.
Image: Werner Hills

Cheryl Zondi may have to relive her harrowing testimony before the Eastern Cape High Court in Port Elizabeth.

This comes after the presiding judge in the rape trial against Pastor Timothy Omotoso recused himself from the trial due to possible "future perceptions" of bias.

Judge Mandela Makaula officially recused himself on Friday because his wife owned a guesthouse where state witnesses in the case stayed.

According to Wits University law professor James Grant, it is very likely that proceedings would have to start afresh with Zondi taking to the witness stand again.

Zondi, 22, was the first witness in the much-publicised trial. Omotoso and his co-accused face charges in relation to trafficking and sexually abusing up to 30 girls.

Yesterday, Grant said the only way that the new judge can get access to the evidence previously presented before the court is through a repetition of Zondi's testimony.

"All evidence heard by the judge has to be reheard."

In a media briefing held on 19 March 2019, Cheryl Zondi told the media she is ready to go through the ordeal of testifying again in the rape case against Nigerian pastor Timothy Omotoso. This comes after the recusal of judge Mandela Makaula’s due to possible “future perceptions” of bias.

He said this would bring pressure on Zondi as testifying in a rape trial was a traumatic experience. Zondi appeared brave during her testimony despite facing tough questions from Omotoso's defence lawyer during cross-examination.

"It can't be a good thing to have to put a victim through this again because there's always that lingering danger of giving conflicting statements."

However, he said the court understood that people can give slightly different versions of the same story so long as the differences were not material.

Attorney Mpho Nefuri said Omotoso's legal team can question the legitimacy of the first testimony and demand a repetition. "If indeed she has to take to the stand again it will have an impact," she said.

Makaula said his decision was his own as he foresaw that there "could be perceived bias in the future".

He said his decision was "in the interest of justice" and he had done so even though he did not own any shares or had any role in the guesthouse.

Makaula had previously rejected an application by Omotoso's lawyer to recuse himself. Peter Daubermann accused Makaula of bias against his client. - Additional reporting Devon Koen

The alleged harrowing tale of Cheryl Zondi's rape ordeal has drawn support for the alleged victim from all corners of the country.
News
2 years ago

The insensitive attitude of Pastor Timothy Omotoso's lawyer Peter Dauberman towards Cheryl Zondi is the reason why women fail to report rape.
News
2 years ago
Next Article