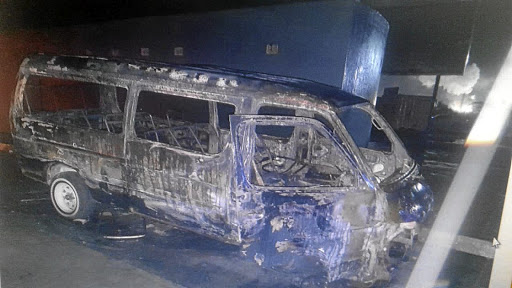 A burnt taxi in the KZN north coast. / SANDILE MOTHA

Fear and anxiety have gripped residents of Mandeni in KwaZulu-Natal after a deadly taxi war erupted in the area.

On Friday, four matric pupils escaped death after being hit by stray bullets when gunmen from two rival taxi associations allegedly ambushed each other and exchanged gunfire in full view of commuters.

The pupils had been attending extra classes at the nearby Impoqabulungu Secondary School and were waiting for taxis to take them home when the shooting ensued.

The pupils are still recovering at a local hospital.

Commuters had to run for cover as hitmen allegedly exchanged fire while shops at Mandeni shopping centre closed early.

Several taxis have been torched since violence broke out after the death of taxi owner Mbomboshe Mbonambi recently.

A fruit and vegetable stall owner told Sowetan: "It was like a movie. A group of gunmen stormed the taxi rank and started shooting. They also shot at the police who were called to the scene."

Thousands of people are at risk of losing their jobs as unrest that led to the torching of factories continue in Mandeni on the north coast of ...
News
3 years ago

Mandeni mayor Siphesihle Zulu has been placed on "special leave", following a week of riots in the town north of Durban.
News
3 years ago

Two gunmen were allegedly injured when they exchanged fire with the police.

Now concerned parents say they fear for the lives of pupils as schools reopen today.

The north coast region is one of taxi violence hot-spots with more than 11 taxi bosses killed this year alone.

Col Nqobile Gwala said: "A high-level police task team has been set up to investigate the root cause of the conflict."

Safety MEC Mxolisi Kaunda said they had suspended taxi operations in the area.

Sundumbili taxi association chairperson Mfanuzile Shozi said: "We always advocate for peace and we wish no harm to anyone. Our guards only reacted after they were provoked."

Machinibini and Mangethe taxi association secretary Micheal Dube blamed the Sundumbili faction of refusing to share routes, calling for the department to intervene.