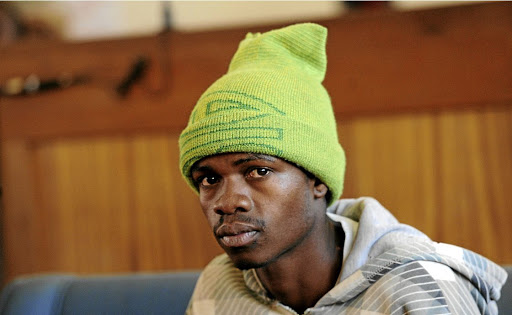 Pogiso Daniel Madiboa, who is accused of the rape and murder of an elderly woman in Coligny, North West, appeared in court yesterday. / Veli Nhlapo

A man has appeared in the Coligny magistrate's court, North West, for allegedly raping and killing a 69-year-old woman.

The 22-year-old Pogiso Daniel Madiboa has also been charged with the assault of the victim's brother.

Long before Madiboa's arrival in court, the community had started protesting outside to express their anger.

As the police van arrived with the accused, the community followed the vehicle into the courtyard.

Madiboa, stood motionless in a black and white jacket and a pair of torn brown pants, just a few metres from where the family of the woman he allegedly raped and killed sat.

Tatius Ndarala, 67, the deceased's brother who survived the attack, said his sister left a local farm (known to residents as Mitlas Water) to visit her family on the other side of Coligny, about 20km away.

Ndarala said her sister began hitch-hiking from about 3.30pm. He said after some time, one of the children in the house came rushing to inform him that there was a man behind the house.

"I went to check who was the man behind the house. Just as I saw him, he hit me hard with a huge wooden stick in the head.

"I fell but when I tried to get up, he hit me again in the head and I was unconscious.

"When I woke up he had tied my arms to the body and was no longer there," he said.

Ndarala was able to untie himself and rushed out to look for help and only learnt later that the children who were in the house had already informed a farmer who lives nearby about the attack.

Madiboa was captured by another farmer and police were called and arrested him.

He had allegedly broke into the house and stole groceries several times before, Ndarala claimed.

He said Madiboa was found in possession of Jane's bag.

Ndarala said Modiboa told police he took the bag and her sister ran into the bushes.

Ndarala then left to check if his sister was at the house where she had said she was going but he could not find her.

A 51-year-old pastor from Limpopo has been ordered to remain behind bars after he wass accused of raping a 12-year-old congregant a week ago.
News
2 years ago

Her son-in-law Tobias Hombane said police promised that Modiboa would tell the truth on the whereabouts of the woman.

The family began the search for her from 6am.

Not long after they began, they followed Ndarala's advice to focus on bushes along the path that his sister could have taken on her way to Coligny.

"The stone which was used to crush her head was next to her. It was too much for us," Hombane said.

Modiboa has another pending case of rape of another elderly woman which he allegedly committed in November.

He was out on bail.

Thabo Makoa, deputy chairperson of the local community policing forum, said: "Should he get bail, I don't want to lie to you I don't know if the community will be happy and allow him to see another day."

His case was postponed to next week.