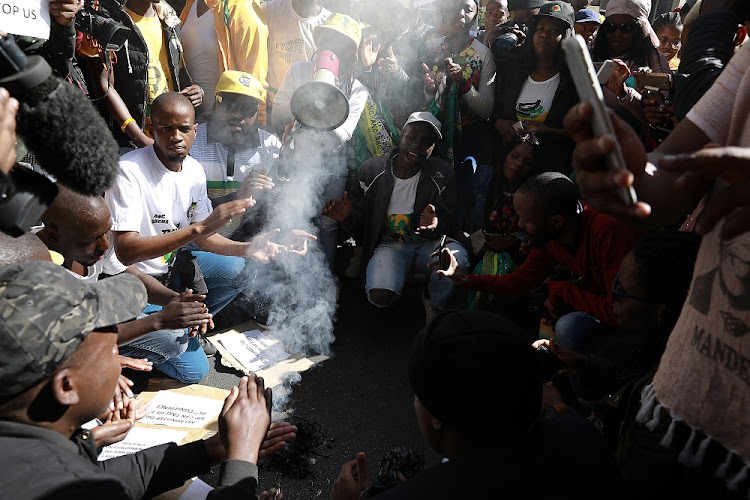 ANC Youth League members picketed in protest against those who have overstayed their terms of leadership in the league .Luthuli House, Johannesburg.
Image: ALON SKUY

Disgruntled members of the ANC Youth League (ANCYL) are demanding that the current structure of the league be disbanded.

The members have accused the incumbent members of deliberately trying to prolong their term of office which expired last year.

ANCYL member Ntuthuko Makhombothi told Sowetan on Tuesday that the time has come for fresh blood.  “The ANCYL national executive committee's [NEC] term of office lapsed last year, so in terms of the ANCYL constitution any decision they take going forward is null and void,” said Makhombothi.

He was speaking on the sidelines of the league's protest outside the ruling party’s headquarters on Tuesday.

Makhombothi, a former South Africa Congress of Students president, said the youth league needs to be rebuilt and the current leaders, led by Collen Maine, do not have the mandate to do so.

The youth league was meant to hold a national conference in June but a number of reasons, including not having enough funds, were cited for its postponement.

Last Friday, a group of disguntled youth league members camped outside St Georges Hotel in Irene to hand over a memorandum of demands to the party leadership. The memorandum was received by ANC spokesperson Pule Mabe.

On Wednesday, Mabe addressed the crowd that had brought Pixley ka Seme Street in Johannesburg  to a halt, demanding to see secretary-general Ace Magashule. Mabe said he would convey the message to Magashule.

“We can assure you that the issues you have raised are receiving attention,” said Mabe.

Support for youth ministry in the presidency grows.
News
2 years ago

Where is Collen Maine hiding?

The much-delayed ANC Youth League conference, which is about nine months overdue, is expected to be held later this year.
News
2 years ago
Next Article