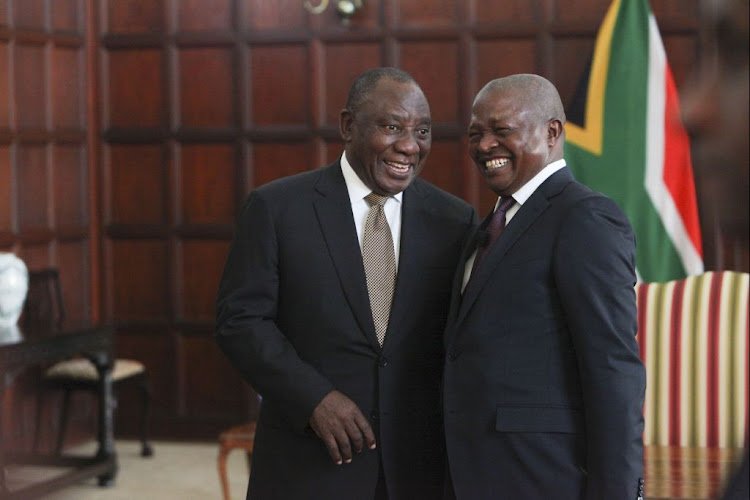 David Mabuza shares a lighthearted moment with President Cyril Ramaphosa after being sworn in as a member of parliament at the presidential guesthouse Sefako Makgatho in Pretoria on May 28 2019.
Image: Alaister Russell/The Sunday Times

He was sworn in as an MP on Tuesday by chief justice Mogoeng Mogoeng at the presidential guesthouse, Sefako Makgatho, in Pretoria.

Mabuza arrived with his oath printed in his hand and took a seat next to ANC chief whip Pemmy Majodina.

Mogoeng conducted the swearing-in and congratulated Mabuza after he took his oath.

President Cyril Ramaphosa congratulated his ANC deputy and was all smiles, announcing, "We are now done" in Zulu.

ANC deputy president David Mabuza was sworn into parliament on May 28 2019. This comes after he postponed his swearing in on May 22 to clear his name with the ANC's integrity committee.

This was indicative of what is yet to come, as Mabuza is now expected to be appointed as deputy president of the country.

He postponed his swearing-in as an MP last Wednesday because he wanted to clear his name at the ANC integrity commission.

Mabuza appeared before the commission on Friday, where he defended himself against accusations of corruption.

The integrity commission was expected to submit its second report by the end of Tuesday.

Public Protector Busisiwe Mkhwebane on Friday cleared ANC deputy president David Mabuza of two complaints against him in his capacity as former ...
News
2 years ago
Next Article