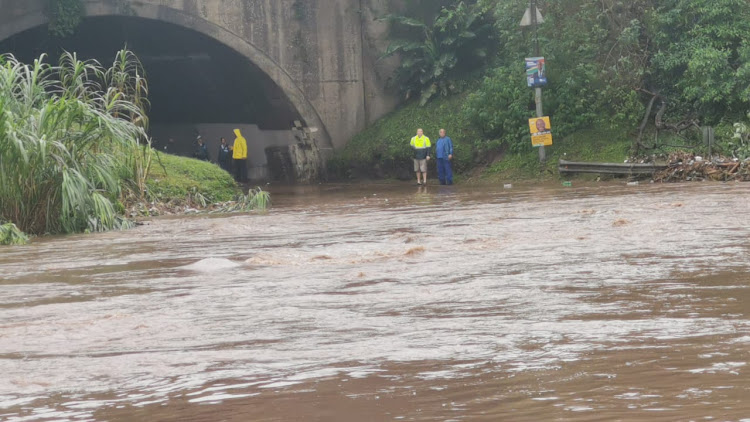 Stapleton Road, west of Durban, is one of the many roads that closed due to overnight flooding.
Image: Supplied

Residents were cautioned to avoid high-risk areas and to be extra vigilant on the roads following the overnight rainfall which lashed most parts of the city.

Early on Tuesday morning, Metrorail announced that railway services were suspended due to all lines being waterlogged. "No trains will be running until further notice," Metrorail said.

Traffic throughout Durban was backed up as several major routes were flooded.

eThekwini mayor Zandile Gumede said emergency services were under massive pressure to attend to flood-related emergencies and were further pressurised by "people who are insisting on driving and getting themselves into unsafe situations".

"I urge residents not to enter fast-flowing streams [not] in cars [nor] as pedestrians. Many of our roads are flooded and some of the structures have been damaged. I would like to advise members of the public to stay off the roads [if possible] at this stage," said Gumede.

The following roads in low-lying areas are flooded and residents are urged to use alternative routes:

King Shaka International Airport spokesman Colin Naidoo said the heavy rain did not affect the airport's operations, however there were long queues into the airport.

"We have had people stranded and unable to get to the airport. This has led to long queues. However, we have had no major operational delays," he said.

Naidoo advised travellers to contact airlines if they were stuck in traffic and to frequently check online for updates on delays.

Meanwhile the death toll rose on Tuesday morning when a 15-year-old in Wiltshire Road was washed downstream.

We attended multiple structural collapses last night with this torrential rain... after pulling out the second baby under 2 years old and putting them in a body bag the reality dawns pic.twitter.com/mU2sgfJbaj

"Apparently around 2am this morning, two children were washed downstream by the mudslide and downpour. The community managed to save the two children, however the third young lady was recovered this morning and unfortunately passed away," Rescue Care spokesperson Garrith Jamieson said.

Earlier rescue teams recovered four bodies - two adults and two children - from a home in Ellen Road, Malvern, which collapsed after a mud slide. They also rescued a woman in her 70s after her home in Overport collapsed. Sadly her son died.

Emergency rescue and medical services have worked through the night in the wake of torrential rains which have pounded parts of KwaZulu-Natal since ...
News
2 years ago

Heavy rains are expected to make driving conditions difficult in parts of the country as motorists head home after the Easter holidays on Monday.
News
2 years ago
Next Article