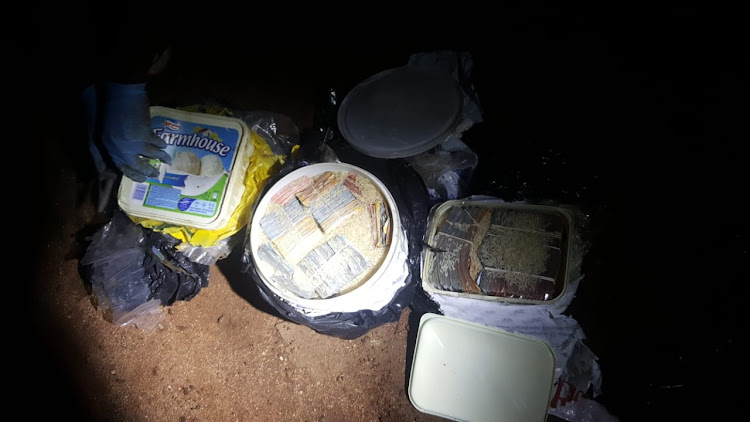 Investigators didn't have to look hard: the loot was buried in the thieves' back yards in ice-cream containers and refuse bags.
Image: Limpopo Hawks

Two former Fidelity security guards have been sentenced to nine years in prison for stealing about R2.9m.

The pair stole the money between December 2018 and January this year.

"The pair had collected money from various places but instead of making deposits, they took the money for themselves," Maluleke said. "The theft was reported by the pair's manager after Maluleke and Luvhimbi failed to account for the missing money."

Maluleke said almost R2.7m was recovered when they were arrested.

The money was buried in their yards in ice-cream containers and refuse bags. One of the men had already bought a new double-cab bakkie and building material, which were confiscated by the investigating team.

A cash-in-transit company is putting up a R1m reward for information that leads to the successful arrest and prosecution of the perpetrators of ...
News
3 years ago

CCTV footage showing a brazen cash-in-transit heist carried out at Laudium Square in Pretoria on Tuesday has surfaced on social media.
News
3 years ago
Next Article