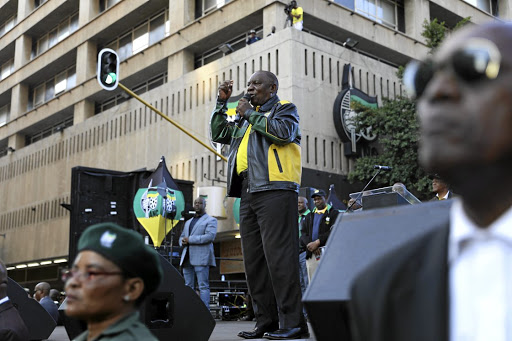 ANC President Cyril Ramaphosa addresses supporters outside Luthuli House in Johannesburg yesterday. He has promised to ring in changes in his cabinet.
Image: MDUDUZI NDZINGI

President Cyril Ramaphosa has promised the nation that he will end corruption in government - whether some people like it or not.

Ramaphosa outlined what he planned to do following the ANC's triumph at the polls, albeit with a reduced majority, stating that the "real work starts now".

He thanked millions of ANC supporters, whom he said voted to ensure state capture does not prevail.

"The Zondo commission must be the thing of the past," said Ramaphosa.

President Cyril Ramaphosa has appealed to ANC members to accept the names of preferred premier candidates the party will consider when leaders meet ...
News
3 years ago

On Saturday, following the declaration of the election results, Ramaphosa tweeted: "beyond this valley, will be redemption and total renewal".

"Those who have been involved in malfeasance, wrongdoing and corruption, must stand and be accountable to the nation. That is what this moment is calling for," he said.

The president also promised to ring in the changes in his cabinet, saying he will appoint people who are competent and credible.

Ramaphosa also spoke out against ANC leaders attacking each other in public.

This came after ANC secretary-general Ace Magashule and ANC head of elections Fikile Mbalula publicly contradicted each other on the performance of the party in the elections.

Mbalula attributed the party's success to the "Ramaphosa effect" while Magashule said voters had voted for the ANC and not for an individual.

Ramaphosa said the party was victorious despite opposition parties preying on its weaknesses. He acknowledged the elections were hard-fought.

The real work starts now. That was the message from President Cyril Ramaphosa on Sunday during an ANC celebration rally outside Luthuli House in the ...
News
3 years ago

The growth of EFF and FF+ threatens to usurp Mzansi's reconciliation project.
Opinion
3 years ago
Next Article