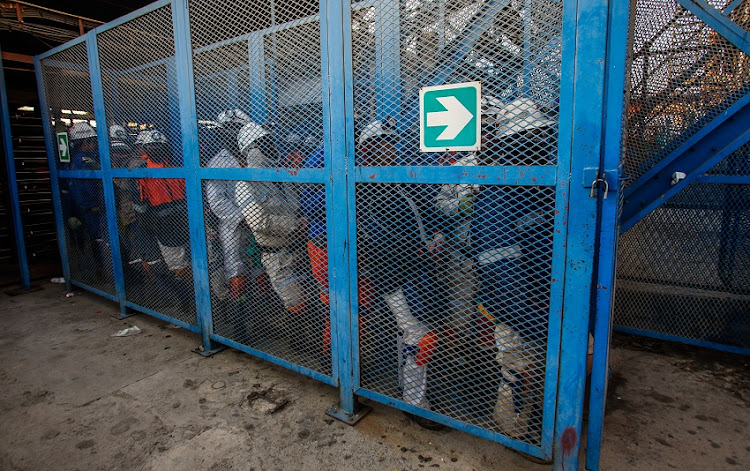 Anglo Platinum Miners board a lift to take them underground on July 4, 2014 at Thembelani Shaft in Rustenburg South Africa. Union Amcu brought an end to the five month strike when they signed a new wage deal. The union accepted the wage settlement that would increase the basic salary of the lowest-paid worker by R1 000 over three years, excluding other benefits.
Image: Gallo Images / Sunday Times / Simphiwe Nkwali

Efforts to bring 1,800 miners safely to the surface after they spent hours stuck underground at the Sibanye-Stillwater mine were proceeding well on Tuesday night, according to the department of mineral resources.

"About 1,000 employees have been safely brought to [the] surface. Work continues to bring up the remaining employees," the department said in a tweet before 9pm.

In an update after 9pm, it said only 262 miners remained underground.

#SibanyeStillwater update: about 1000 employees have been safely brought to surface. Work continues to bring up the remaining employees.

"DMR inspectors and proto teams are on site monitoring the situation. The employees underground are in safe, ventilated areas. Updates will be provided," the department said earlier in the day.

It was not initially clear how long the miners would need to remain underground but no injuries were reported.

Sibanye issued a statement saying that the incident had happened at around 1pm.

"Some rails which were being transported underground at the Thembelani shaft, Rustenburg, whilst being slung under the conveyance, came loose and fell down the shaft," said spokesperson James Wellsted.

"Shaft personnel are removing the rails from the shaft and conducting an inspection to determine if there has been any structural damage to the shaft, following which a decision will be made to either use the Thembelani shaft, should it be safe to do so, to remove employees from underground, or the second outlet at the adjacent Khuseleka shaft," he said.

Wellsted added that there were no serious injuries or fatalities reported, saying "all employees are safe".

Mineworkers union Amcu had earlier said it believed that as many as 4,000 miners were affected but the mine said the figure was less than 2,000.

• This story was updated at 10pm