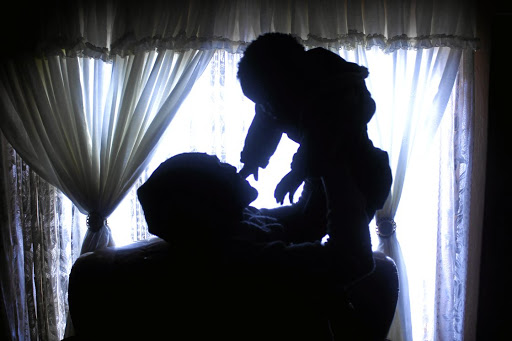 A Tembisa woman plays with one of her five children who were sired by her stepfather from 2003 to 2017. The mom is intellectually challenged.
Image: KABELO MOKOENA

A mother broke down as she recalled the pain she felt when she learned that her husband of 29 years had fathered her daughter's five children.

Her worst fears were confirmed two weeks ago when DNA results revealed that her husband fathered all her grandchildren.

The Tembisa, East Rand, resident said her life was turned upside down in April last year when she discovered that her husband had been raping her daughter.

This was after she was called by her grandchildren's school to account why the kids did not have decent uniforms.

"The children's teachers called me to school because they had torn shoes and old clothes. They asked me about the children's father and I told them that I did not know him.

"My daughter became aggressive every time I asked her who fathered the children."

Fathers, your kids need your love!

Just a week ago, a listener called a radio station for opinion on what he should do to get an ID, because his father had renounced him.
Opinion
3 years ago

She said though her 35-year-old daughter had never beenproperly diagnosed, she has had learning difficulties, hearing and speech problems all her life and she dropped out of school in grade 3.

The mother said teachers referred her to social workers, who asked her daughter about the children's father and she told them that it was her father. The social workers then referred the matter to the police. "That's when I got to know that my husband had been sleeping with my daughter all these years," she wept.

The mother said social workers then referred the matter to the police. Thereafter paternity tests were done and the results were sent to the police two weeks ago to form part of their evidence.

"I felt like I was losing my mind. I had so much anger in me and at times I felt like I could hit him with something.

"My heart was sore. I confronted him about the results and he admitted that it was him. He said he would invest money for the children and build them a house. It made no difference to me, the damage was already done," said the emotional mother.

Bail conditions have been relaxed for a Durban mother accused of dumping her newborn baby in a stormwater drain.
News
3 years ago

When Sowetan spoke to the the kids' mom, she said her stepfather threatened to kill her should she tell anyone.

"He said he would kill me. He did it when my mother went to church [services] and night prayers. One time he found me in the room ironing; he came in and closed the door," she recalled.

"He took his clothes off and blocked me when I wanted to leave the room. He then took off my clothes and 'did it'. The other time I screamed and the neighbour heard me. She asked me what was happening and I did not tell her. I was afraid of him," she said.

The 59-year-old man was arrested and charged with rape.

The man is expected to appear in court next week.