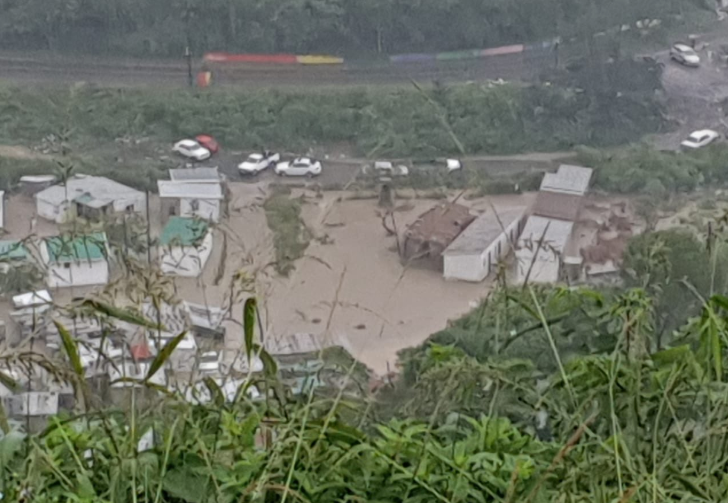 Residents have been evacuated after torrential rain caused flooding in the town of Port St Johns in the Eastern Cape on Monday, April 22 2019.
Image: Twitter/Bantu Holomisa

The SA national defence force (SANDF) arrived in Port St Johns on Tuesday to help rescue and evacuate hundreds of residents left homeless by torrential overnight rains that flooded the coastal town in the Eastern Cape.

Defence and military veterans minister Nosiviwe Noluthando Mapisa-Nqakula said military rescue teams were dispatched to affected areas where they will work with other disaster teams.

People affected by the floods would be moved to higher ground and shelters.

Initial reports on Monday night by the SABC said that hundreds of people, mostly women and children, were evacuated from the badly flooded Green Farm in the coastal town.

Khunjulwa Mlata told the broadcaster: "I discovered when I go out again that the room was full of water. All the belongings inside were just swept away. I took the kids outside to the municipality vehicle that was standing outside already. We just decided to take the kids."

OR Tambo district municipality spokesperson Andile Duka said that rescue teams had evacuated a large number of people until late on Monday evening after heavy downpours.

Residents had been taken to safety at the town hall and churches.

People driving between Port St Johns and Mthatha are warned to be on the lookout for falling rocks and mudslide/landslide caused by heavy rains pouring since Easter Weekend. @eNCA @sa pic.twitter.com/BJM1VtiUQU

More than 100 people were relocated to the town hall in Port St Johns - mostly tenants and home owners.

Local businesses had donated food, blankets and home-cooked meals to the displaced.

Duka said there were "challenges are around mobility, access to flooded areas, risk of electrocution and continued damage to personal and government property".

At least 328 people were affected when 100 houses were flooded, according to preliminary reports.

Duka said a meeting was scheduled for 10am to determine exactly how many people had been affected and to identify the areas worst affected by the floods.

"That meeting will give us the latest update. This morning we have not received any more news of evacuations, but I cannot say there will not be more evacuations."

This Easter weekend left many places in South Africa flooded and destroyed. Temperatures across South Africa plummeted, resulting in some snow across the country. People took to Twitter to show the rainfall in their area.

Emergency rescue and medical services have worked through the night in the wake of torrential rains which have pounded parts of KwaZulu-Natal since ...
News
2 years ago

Heavy rains are expected to make driving conditions difficult in parts of the country as motorists head home after the Easter holidays on Monday.
News
2 years ago
Next Article