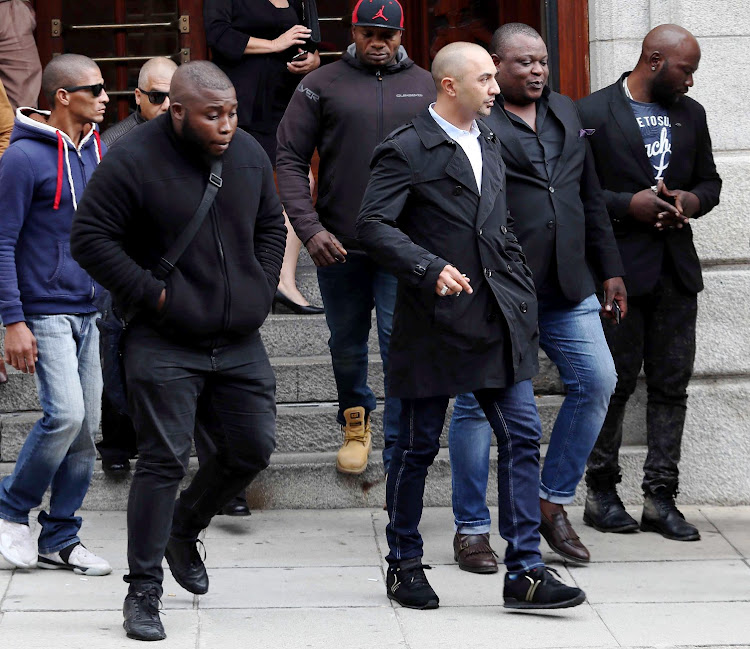 Alleged extortionist Nafiz Modack outside the Cape Town Regional Court during a break in his trial on April 16 2019.
Image: Esa Alexander

This was after the officers moonlighted as security guards at Grand Café Africa's annual prizegiving ceremony in November 2017, said the club's brand manager Radley Dijkers.

Days earlier, said Dijkers, the unit's commander, Cpt Sharon Japhta, threatened to arrest him if he did not make a statement implicating Nafiz Modack, Colin Booysen and three other men in extortion.

After he made his statement, he called Japhta and requested the help of her unit to secure the prizegiving.

"I contacted Capt Japhta to find out if she could place some of her operatives at the event to keep me safe," said Dijkers.

"Most of the gang unit arrived in plain clothes," he said.

One of the members asked him for a Grand Café Africa puffer jacket and after asking Japhta for permission he gave her and her members six jackets worth a total of R1,800.

Dijkers' statement implicated Modack, Booysen, Ashley Fields, Jacques Cronjé and Carl Lakay in an alleged attempt to extort his company. He said the jackets were intended to "generate goodwill" towards him.

"To give a policeman a gift in order to generate goodwill towards you while they are performing their official duties is a crime," said Uys.

Uys was cross-examining Dijkers about why he visited alleged underworld boss Mark Lifman at his home in Sea Point shortly after he made his statement to investigating officer Lt-Col Charl Kinnear.

Dijkers said Lifman picked him up at The Grand, on the Green Point seafront. He said they spoke about the extortion case, and when he told Lifman he "didn't have the stomach" to go ahead with it, Lifman encouraged him to do so.

"I said it wasn't something I wanted to do ... but if there was no other way that I would have to testify," he said.

"I told him that for me to continue I needed to be safe," and he had asked Lifman for the contact details of the security service he used for personal protection.

While he was at Lifman's home, Japhta arrived with other members of the "gang unit". He said he was surprised to see Japhta, a police officer he trusted, and that he was embarrassed that she had discovered him at Lifman's home.

"I was embarrassed to be seen there. I felt uncomfortable about being there," he said. "I told her what I was doing here because I was concerned what she would think of me."

However, Japhta did not seem surprised to see him. Uys put it to him that this was because there was a conspiracy between Lifman and the police against Modack.

Dijkers said that there was no conspiracy that he was aware of.

The state's key witness in the case about an alleged extortion racket, allegedly run by Nafiz Modack and Colin Booysen, was charged as an accessory ...
News
3 years ago

The manager of Grand Café Africa‚ Radley Dijkers‚ said he "had no choice" but to use the services of TSG‚ a security company which is allegedly the ...
News
3 years ago
Next Article