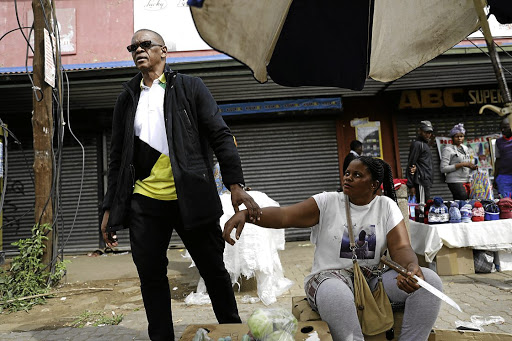 A new book lays bare ANC secretary-general Ace Magashule's shenanigans in the Free Sate and the general rot that has beset the party. The backlash is a travesty of history, says the writer. /ALON SKUY

A gangster has been caught out. Peter-Louis Myburgh's book, Gangster State: Unravelling Ace Magashule's Web of Capture, exposes all the corruption, the thieving, and the callousness Ace Magashule thought would lie permanently buried under the political rubble called the ANC.

That the same party that fought for freedom of expression is now the one whose thugs go around disrupting book launches is truly a travesty of history.

When the old ANC was still alive, it never disrupted book launches - not even the launches of rival political parties. If the party felt stung by a particular development, or by a publication, it used to marshal its intellectual forces to take on whatever disputable claims made by its opponents.

Those with memory will remember a witty pamphlet titled, "The Pan African National Congress of Azania: A viable alternative, or a flat spare tyre?" This document was authored by the intellectual big guns of the old ANC in 1998, exposing the hollowness of the PAC's claims against the ANC.

Long before 1998, an intellectual giant belonging to the ANC family, Joe Slovo, had written a world-influential tract, "Has Socialism Failed?", to silence over-exuberant liberal voices that were trumpeting the End of History thesis.

It is true that, by the time Slovo made his intervention, socialism had indeed failed in the Soviet Union and China, but the sharpness of Slovo's logic caused an intellectual pause.

Today, there is not a single ANC leader who sits on its national executive committee who can write anything worth reading. Isolate the old intellectual guard: Joel Netshitendze and Thabo Mbeki.

That the ANC's current president, Cyril Ramaphosa, can write is an allegation. What approximates an intellectual product from him is a plagiarised song from Bra Hugh Masekela - Thuma Mina.

Indeed, ANC presidents used to be intellectual giants who could think and write. Writing, especially serious writing, is the apotheosis of a highly developed mind. Such a mind can no longer be found in the ANC. From OR Tambo to Ramaphosa is a precipitous decline.

If you need more evidence than Ramaphosa, think of the party's current deputy president, DD Mabuza. When the ANC was still alive, the closest such a nincompoop could get to an ANC office would have been as a cleaner. Even drivers in the old ANC grasped a thing or two about the theory of dialectics.

A liberal thinker such as Tony Leon could not avoid sharing his experience of "dancing with dialectics" in his book, On the Contrary. Poor Mabuza, he has never heard of the unity of opposites. No wonder the ANC now has an army of thugs whose role it is to disrupt book launches.

In the absence of serious intellectual disrupters, the party has no choice but to rely on mindless storm troopers. The ANC is in such a tailspin that it believes it can fool the public by using threadbare spin-doctoring. In the wake of the Gangster State, we have been told that the whole brouhaha has nothing to do with the party, that Magashule must defend himself.

What nonsense is this!

The fact is, Magashule is a gangster, groomed by the ANC. The whole party today is a gangsters' paradise. Look no further than the top six itself, if you need evidence.