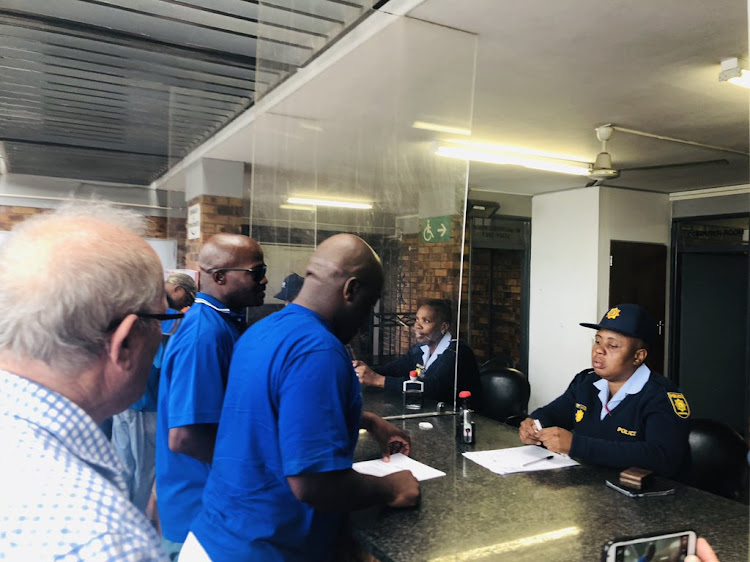 Gauteng premier candidate Solly Msimanga (DA) at the Alexandra police station to lay criminal charges of incitement of violence against the ANC on April 7 2019.
Image: Solly Msimanga via Twitter

The leader of the #AlexShutDown movement has slammed the DA's Gauteng premier candidate Solly Msimanga for opening a case against their action.

Msimanga claimed that the protests in Alexandra, Johannesburg, were not related to service delivery but were co-ordinated by the ANC "in order to influence the outcome of the general elections" next month. He laid a charge of incitement of violence and said in a tweet he had presented evidence to the police.

Last week several roads in Alex were blocked with rocks and burning tyres.

But the leader of the movement, Sandile Mavundla, has hit out at Msimanga. "We are not the ANC, we are the community. There is no case against the community. It is an element of the apartheid regime.

"If the community of Alexandra must be arrested on the case based on Solly's evidence, it will show that apartheid is still working in South Africa. We have the right to picket and to strike," he said.

Mavundla said they would not be deterred by the opening of the case and would go ahead with their march to Sandton - delayed to mid-morning Monday due to the morning rains.

Community members are gathering at the Alexandra stadium and are expected to march to the municipality offices in Sandton, where they will hand over a memorandum.

Johannesburg metro police department spokesperson Wayne Minnaar said the situation in Sandton was still calm. Minnaar said the M1, Grayston and Marlboro Drive are likely to be affected by the march.

The ANC is running scared of losing the elections on 8 May & will stop at nothing to hang on to power in Gauteng.

If they are serious about this issue, they will join us for a public meeting in Alex so they can answer for their time in office. #AlexTotalShutDown pic.twitter.com/K5YSgSHR65

I presented the SAPS with evidence of how the @GautengANC was conspiring to instigate violence by coordinating plans with local affiliates on the ground to embark on violent protest actions. #AlexTotalShutdown pic.twitter.com/MOgO4bDijH