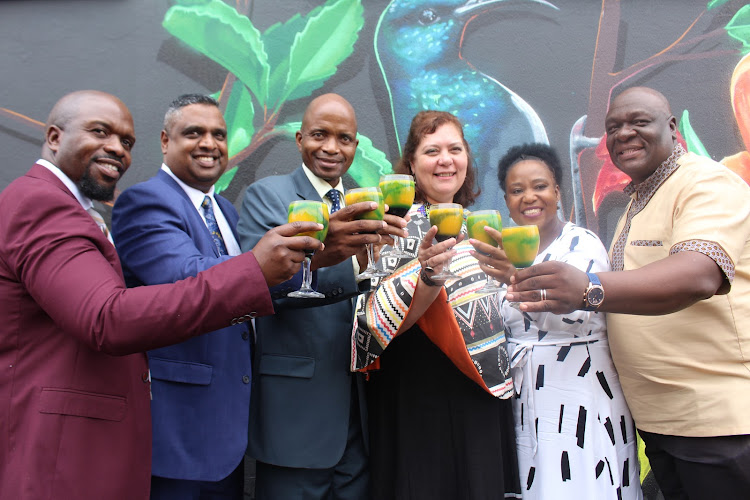 Leon Rajoo, second from left with some of the stakeholders of the Africa’s Travel and Tourism Indaba
Image: Supplied

Leon Rajoo is set to be one of KwaZulu-Natal's entrepreneurs showcasing their inspirational businesses at the Africa Travel Indaba between May 2 and 4. The travel indaba showcases a variety of tourism packages and products Africa has to offer to buyers from across the world.

The event, which will take place at the Durban International Convention Cente, is set to continue despite the suspension of SA Tourism CEO Sisa Ntshona earlier this week. Ntshona was suspended after someone tipped off the organisation with several allegations. It is still unclear what the allegations are at this stage.

Rajoo, who owns Discover Travels and Tours, spoke at the launch of the indaba on Wednesday in the tourist hub of Durban about his difficult journey into being an entrepreneur in the tourism industry. He said he lost his job while he was still a young husband and father after having worked in the tourism industry for a number of years. "I was retrenched 11 years ago and I had a very young family at the time," Rajoo said.

He was only offered a small severance package that would not have been able to sustain his family. Rajoo decided to sell his car, took a tourism course and bought another vehicle to start a tour business in an effort to provide for his family. "I just had that ingrained human need to survive."

SA Tourism CEO Sisa Ntshona has been placed on “precautionary suspension” after the organisation received a tip-off on its anonymous reporting line.
News
2 years ago

Although it has been a tough journey, Rajoo now owns nine vehicles he uses on the tours and employs six permanent people. His story is just one of thousands expected to be told by entrepreneurs during the indaba.

Amanda Kotze-Nhlapo from SA Tourism said this year’s trade show will be better and bigger than the two previous years, adding that the Africa Travel Indaba is the longest-running Africa trade show on the continent with 30 years behind its name and 890 African exhibitors registered thus far. "The world is ready to come and buy Africa... its only by showcasing ourselves that we will see the jobs that we are longing for," Kotze-Nhlapo said.

She explained that the tourism industry creates 153,000 jobs in SA every year and continues to be a growing industry.

"We want to encourage all Africans to control their own narrative's... we need to change our perception from an Africa that needs saving. It is up to each of us to be vigilant of the way Africa is depicted. The indaba is an opportunity to show them again [that] we can do it," noted Kotze.

A 63-year-old man from the UK died while scuba diving  in Simon's Town in the Western Cape, the NSRI said on Sunday.
News
2 years ago
Next Article