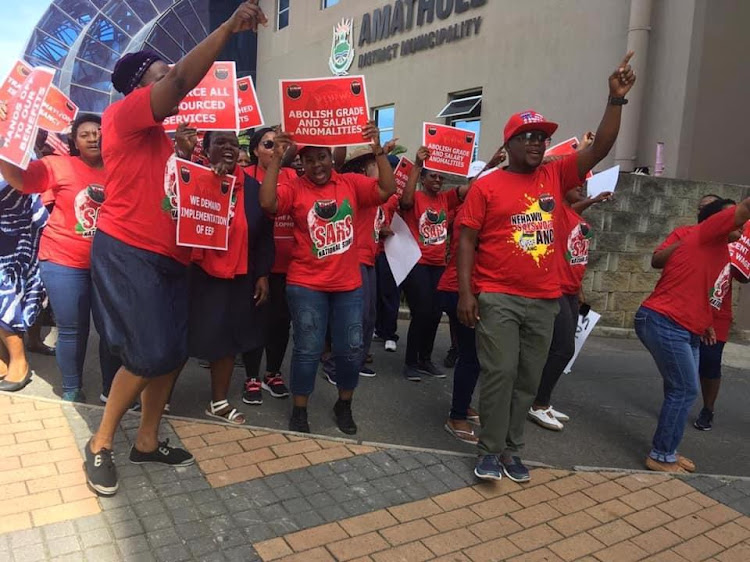 Sars employees took to the streets in a wage-related strike that saw several branches of the revenue service close their doors on Thursday, March 28 2019.
Image: Twitter/Cosatu

SA Revenue Service (Sars) employees took to the streets on Thursday as they embarked on a national strike over wages that saw branch offices in towns across the country close.

Workers affiliated to the National Education Health and Allied Workers' Union (Nehawu) and the Public Servants' Association (PSA) demanded an 11.4% increase in a one-year deal.

Sars was offering the workers 7% in the first of a three-year deal.

PSA spokesperson Ivan Fredericks said workers were allowed to protest at certain places only, but the numbers were "swelling". orkers in almost all nine provinces went on strike.

He said in smaller towns such as Kimberley and Nelspruit the Sars offices were closed.

The EFF has questioned the interview process for a new South African Revenue Service boss, calling it “nepotistic” and “corrupt”.
News
2 years ago

"We will be on strike until such time the ministers and commissioners involved will come back to us with an offer.

"We do not want a three-year term. People are complaining because since the last time, the prices and the cost of living have increased ...  it means nothing," Fredericks said.

For the first time in a decade, Sars employees are set to down tools in a strike over wages that could disrupt the movement of goods across the ...
News
2 years ago