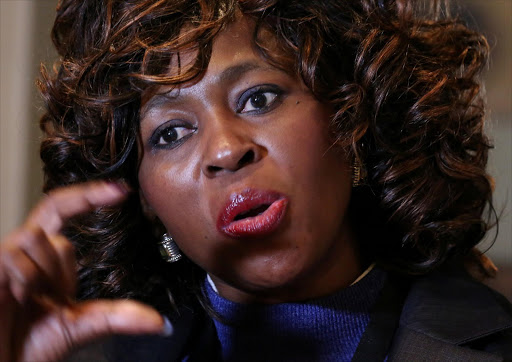 Former ANC leader Makhosi Khoza has hit out at her former political home for including people who are facing corruption allegations in its elections list.
Image: REUTERS/Siphiwe Sibeko

Former ANC MP Makhosi Khoza has lambasted President Cyril Ramaphosa and the party for including members facing serious allegations of corruption into their list of candidates expected to head to parliament after the elections.

Khoza, who has since returned to politics after “resigning” in 2017, says she is vindicated for leaving the governing party as it proves to have no desire to cleanse itself.

"How do you explain that the very same people that are implicated in the state capture [commission] are in the list of the ANC and they are going to parliament?

"There is no commitment to rooting out corruption in the ANC. There is not going to be any commitment of electoral reforms because they are benefiting from the current system and therefore, they are going to remain with the status quo," Khoza told Sowetan yesterday.

Her remarks follow the party’s inclusion of a number of current and former ministers on the list who have several controversies hanging over their heads that has drawn much attention.

Makhosi Khoza has yet again switched positions in her never-ending game of political musical chairs.
News
2 years ago

Khoza, who has since re-joined African Democratic Change (ADEC) after hanging her boots from Organisation Undoing Tax Abuse earlier this month, resigned from the ANC in 2017 after she was charged by the KwaZulu-Natal structure for bringing the party into disrepute.

Khoza had been criticised by some members of the party for speaking out about alleged corruption by former president Jacob Zuma, among other issues.

"I feel vindicated because when I said the ANC has no capacity to self-correct, I meant it and I still maintain it. What’s the use of having all these commissions when you have the deputy head of state that is well known even in Mpumalanga [for alleged political killings] and the ANC is not committed to building the moral fibre of society,” she alleged.

Deputy president David Mabuza has been accused by some of his internal political opponents of assassinating those that differed with him when he was still the chairperson of the ANC in Mpumalanga.

In August, Mabuza opened a case at Embalanhle police station in Secunda, Mpumalanga, against those who accused him of being an assassin over the years.

Khoza said the ANC was still determined to align itself with people facing such allegations.

"They (ANC) are only interested in the unity, even if that unity is about signing a pact with the devil,” said Khoza.

She also criticised the president’s son, Andile Ramaphosa, for doing “business” with Bosasa.

On Tuesday, it emerged that Andile scored R2 million from the company for “advisory mandate” through his company Blue Crane Capital.