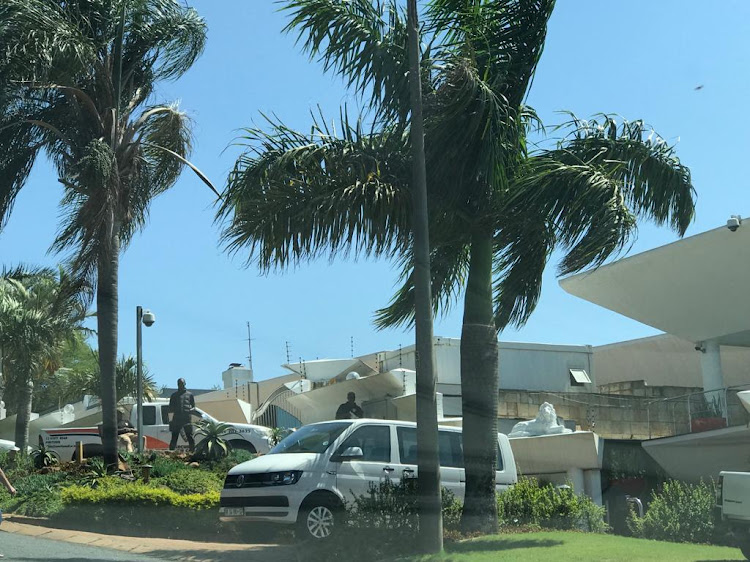 The Mpisane house in Addison Drive, Durban, was a hive of activity on March 13 2019 as various officials, including members of the National Intervention Unit, visited the house.
Image: Thuli Dlamini

The curator appointed to take control of the assets of Sbu and Shauwn Mpisane, which are under attachment by revenue service Sars, has been forced by court order to leave their properties and remove armed guards he put there to secure assets.

Following a late-afternoon urgent application on Wednesday, Durban High Court judge Gregory Kruger also gave Shauwn Mpisane permission to revert to him personally if curator Cloete Murray failed to comply with his order. The judge warned Murray that he would have to show cause why he should not be found guilty of contempt of court and jailed for six months.

Sars is involved in an ongoing dispute over what the Mpisanes and their Zikhulise Group owe the taxman.

Sars made two successful court applications - one in Durban and the other in Pretoria - in 2016, in terms of which the assets were to be preserved to cover an alleged debt of R141m.

Curators Henk Strydom and Tshifhiwa Mudzusi were tasked with identifying assets but they said they were constantly hampered by the Mpisanes.

Sars then withheld payment to them and they insisted that they could no longer do the job.

In spite of allegations by Shauwn Mpisane that Murray was nothing more than a "hired gun" for Sars and would not be objective, late in February, judge Jacqui Henriques granted an order appointing him as curator, saying she would give her reasons later.

Shauwn Mpisane, through her attorney Manogh Maharaj, immediately applied for leave to appeal against this order and claimed that in terms of the Superior Courts Act, the order by judge Henriques was automatically suspended.

In her affidavit, Mpisane said that Murray had arrived at her Addison Road, La Lucia, home on March 4 and "invaded my living space".

He left after intervention by her attorney.

But this week he came back with private, armed security guards.

"He said he did not agree that the order was suspended and that he would proceed to do what he needed to do.

A new curator has been appointed to take control of the substantial assets of Sbu and Shauwn Mpisane.
News
2 years ago

"He has taken unlawful control of my residence and has installed his own private security guards to regulate access."

In terms of the order granted by judge Kruger, Murray undertook not to act in terms of judge Henriques order and not to harass or communicate with Shauwn Mpisane, other than through her attorney.

It was recorded that while Murray was entitled to place guards "wherever he deems fit", it could not be on Mpisane's properties in Addison Drive, Byrne Court and Moreland Drive, and they were not to affect access to her property in any manner.

While Sbu Mpisane is part of the litigation, he has not personally filed any affidavits in the matter because the couple have separated.

Shauwn Mpisane claims that Sars had already made several concessions about what was owed in respect of PAYE and income tax, and her companies were now due a refund.

The amount of VAT in dispute was about R10m and this would be argued before the tax court later this year.