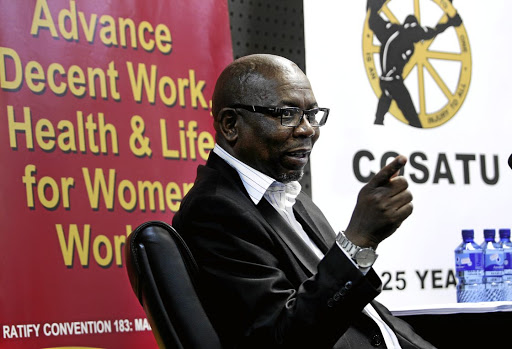 Cosatu has lambasted investigating bodies, accusing them of tip-toeing around private business involved in corruption.

"Cosatu is unhappy that there is no appetite or political will to investigate and prosecute private sector corruption. The private sector is also responsible for the economic mess the country finds itself in," said Cosatu's general secretary Bheki Ntshalintshali.

He was addressing members of the media on Thursday following the trade union federation's three-day central executive committee meeting this week.

The labour federation said  despite amendments been made to the Competition Act criminalising  collusion and calling for jail terms of up to 10 years for directors and employees found to have been fingered in corruption, nobody was yet to be imprisoned.

"The time for indecisiveness is over for  law enforcement agencies… the federation has taken a decision to put together a team to start following the ongoing commissions of inquiry so that they can follow the proceedings and open cases where necessary," said Ntshalintshali.

Since ascending to the Union Buildings, President Cyril Ramaphosa has set up a total of four commissions of inquiry, all related to the abuse and capture of state resources.

The inquiries are investigating the break down in good governance and corruption at key institutions such as the South African Revenue Service, National Prosecuting Authority, state-owned entities and various government departments during the presidency of Jacob Zuma.

The commission of inquiry into state capture, headed by deputy chief justice Raymond Zondo, is under way, along with the commissions into the NPA, chaired by former Constitutional Court judge Yvonne Mokgoro, and the Public Investment Corporation. The commission looking into tax administration and governance by Sars concluded its work last year.

A deadlock between Cosatu and government over the unbundling of Eskom has persisted following failed talks on Tuesday.
News
3 years ago

Deputy secretary general of Cosatu Solly Phetoe has added his voice to the call already made by the labour federation that ANC members implicated ...
News
3 years ago
Next Article