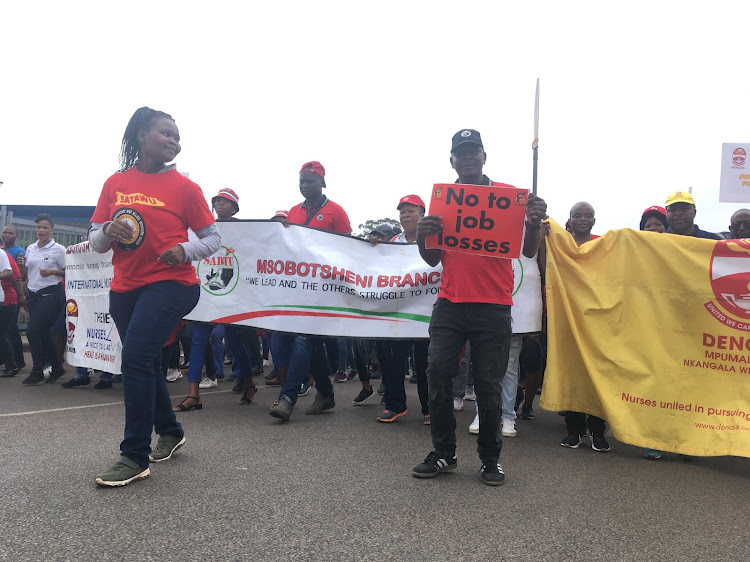 Cosatu members in Mpumalanga also joined in in the national strike yesterday against poverty and privatisation of Eskom.
Image: Mandla Khoza

Deputy secretary general of Cosatu Solly Phetoe has added his voice to the call already made by the labour federation that ANC members implicated in the Zondo commission be removed from the party's parliamentary list.

Speaking during Cosatu's national shutdown in Lynville in eMalahleni, Mpumalanga,  Phetoe said the state needed to protect whistleblowers of corruption and arrest those responsible for the murder of two Samwu members who were vocal against the looting of VBS Mutual Bank.

Cosatu yesterday embarked on a national shutdown against corruption and unemployment.

Addressing a huge attendance by over 10,000 members, Phetoe also called for the payment of the miners of Gloria coal mine in Middelburg to be made as soon as possible. The mine owned by the Gupta family has since closed down.

"We also asking the state to protect whistleblowers because two Samwu leaders who exposed corruption in Limpopo were shot and killed and we can’t keep quiet on that and those who did that must be arrested.”

“Eskom, with unbundling or not there must be no job losses. We have never seen a restructuring [without] job losses. So we are saying those corrupt top managers must be the ones who are retrenched not out workers.”

South Africa’s largest trade union Cosatu took to the streets of Johannesburg on Wednesday as part of their one-day nationwide strike. Thousands of members sang as they marched against job losses and the plan to restructure Eskom.

Provincial chairperson of Cosatu Live Monini told the marchers that they were prepared to make Mpumalanga ungovernable if the employees of Gupta-linked Gloria mine are not paid their salaries. He did not specify who must pay the salaries.

“Let’s not punish workers as we deal with state capture, because there are employees who have not been paid for over four months in this Gupta mine.

"The poorest of the poor are not working now, and we want to state it that we cannot have deployees of the ANC who will swear at us. Like [mineral resources minister] Gwede Mantashe we want say to him that we can’t accept what he says 'we must stop being dirty' when we talk about workers issues.

"He is our deployee from NUM but he is swearing at us,” said Monini.

The department of basic education is "extremely concerned" that schools across the country may be disrupted by the national Cosatu strike today.
News
2 years ago

He added that the unbundling of Eskom to them equalled to job losses and therefore they don’t support the split of the power utility.

Mpumalanga premier Refilwe Mtsweni was among officials of the department of labor received the memorandum from the marchers.

Mtsweni said she would make sure that their demands were met.

“As the premier, I will make sure that I speak to my sister departments and government as a whole about you issues,” said Mtsweni.

While over 2,000 workers at Gloria mine have not been paid for the last four months, about 22 people believed to be illegal miners were  trapped in the mine in Middelburg.

An interdict instructing the mine to resume rescue mission of the trapped people was issued on Wednesday.