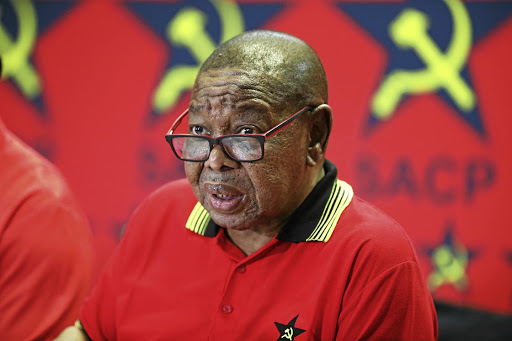 Blade Nzimande during a press briefing after the SACP's first plenary session of the year.
Image: Thulani Mbele

The SACP has criticised its ally, the ruling ANC, for taking a decision to unbundle Eskom into three entities without any prior consultation.

The criticism comes after finance minister Tito Mboweni announced during his budget speech last week that the parastatal will set up a transmission company with its own independent board by the middle of the year.

President Cyril Ramaphosa announced in his State of the Nation Address earlier this month that Eskom would be split into three units - generation, transmission and distribution.

The announcement was met with criticism from ANC allies as well as some opposition parties as they feared the unbundling of the power utility would result in privatisation and retrenchments.

Speaking to the media yesterday following the party's three-day central committee meeting in Johannesburg, SACP general secretary Blade Nzimande said the key decisions needed to be debated and ideally agreed on by all the alliance partners, "not just one alliance party".

"There should be thorough consultation within the alliance," Nzimande said.

The SACP and Cosatu said the consultation process should have taken place before Ramaphosa made the announcement.

"We don't want a government that gets used by factions to privilege themselves, that is part of the alliance, let's get rid of factionalism when it comes to the operations and running of the government," Nzimande said yesterday.

"People in position of power can't just use deployment or redeployment to settle factional scores in the movement."

We don't want a government that gets used by factions

However, earlier yesterday, the ANC's chairperson of its economic transformation committee, Enoch Godongwana, said this was untrue.

"In so far as it comes to restructuring of state-owned enterprises, that discussion has taken place among all of us and some of us were called in as part of that discussion," said Godongwana.

Chairperson of communications sub-committee and ANC national executive committee member Nkenke Kekana said it was natural for alliance partners not to see eye to eye when it comes to making key decisions in the government.

"From time to time, there will be differences of emphasis, but generally speaking, our boats are sailing in the same direction. There are points of emphasis where we will differ," Kekana said.

He said Cosatu will talk about safeguarding jobs.

"The Communist Party may talk about issues affecting the left but it does not mean there is conflict between these three parties that are in alliance."

The SACP said it didn't support the privatisation of Eskom and said the parastatal finds itself in crisis as a result of poor policy decisions, state capture and other forms of corruption.

The South African Communist Party has rubbished claims that former president Jacob Zuma’s years in government were wasted years, arguing that a lot ...
News
3 years ago

When the lights go out and electricity off, it can be as cold as Comrade Gedle's heart
Opinion
3 years ago
Next Article