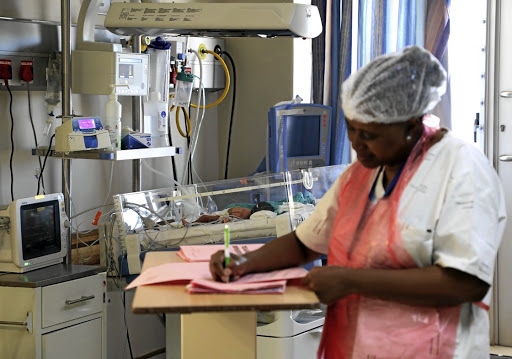 A nurse monitors a baby in the new neonatal ward of Thelle Mogoerane Hospital in Vosloorus, Ekurhuleni.
Image: SANDILE NDLOVU

Respiratory problems and extremely low birth weight are among the reasons behind the deaths of eight babies at a Gauteng hospital where nurses raised alarm over another deadly infection outbreak.

This explanation by the management at the Thelle Mogoerane Hospital in Vosloorus on the East Rand comes after more babies died from Klebsiella in January, following a major outbreak at the same hospital last year.

However, nurses and other staff members accused the management of opening a ward where six babies died in 2018 before a thorough disinfection was done.

When Sowetan visited the facility this week, at the invitation of hospital management, empty cubicles inside the ward showed that the unit was still closed.

The hospital's acting CEO Michael Malaka said the previous outbreak was successfully contained and there had been no reoccurrence.

Eight babies have died in one month at a Gauteng hospital ward in what nurses fear could be another deadly outbreak.
News
2 years ago

Malaka said of the eight babies that died in January six had experienced respiratory complications while their birth weight was below 1,000 grams. He said one baby died of a brain infection.

Malaka said laboratory tests results showed that the eighth baby was infected with Klebsiella but died from complications associated with prematurity.

"We want to put it on record that there is no outbreak."

Malaka said upon realising the infant had been infected with Klebsiella, six other babies who were exposed to that infant were isolated and tested.

"All of them tested negative for Klebsiella and three were discharged," Malaka said.

He added that the remaining three babies also tested negative but would be kept in isolation until they were discharged.

We want to put it on record that there is no outbreak.

The hospital is currently utilising a different neonatal ward with a capacity of 59 beds while the old ward is expected to undergo extensive renovations within the next financial year, Malaka said.

Clinical manager Dr Emanuel Chukwuma said the renovations would include breaking down one of the walls to ensure the matron has a clear view of patients.

Chukwuma said more oxygen connection points would be installed while one of the entrances would be placed under strict control to ensure that people do not use the ward as a passage to other areas of the hospital.

Yesterday, new mothers could be seen washing their hands and wearing protective gear before entering the neonatal ward as part of strict infection control.

Management of the Rahima Moosa Mother and Child Hospital in Coronationville‚ Johannesburg‚ has conceded that it violated patients’ rights to quality ...
News
3 years ago

The babies were supposed to be moved to the Nelson Mandela Children’s Hospital and Charlotte Maxeke Academic Hospital in Johannesburg.
News
3 years ago
Next Article