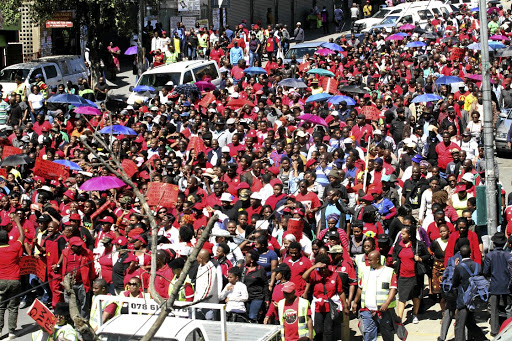 Cosatu is embarking on a strike today that it hopes will bring all nine provinces to a standstill and highlight the fight against job losses.
Image: LULAMILE FENI

The department of basic education is "extremely concerned" that schools across the country may be disrupted by the national Cosatu strike today.

The Congress of South African Trade Unions (Cosatu) is embarking on a strike that it hopes will bring all nine provinces to a standstill.

"We hope it will not be the case because teachers know the practical implications of halting teaching and learning," said Mhlanga.

He urged parents to take their children to school.

"We hope the situation will be resolved without negatively affecting school activities. We urge those protesting to do so without disrupting schools," he said.

As SA wakes up to the threat of a massive strike against job losses, nurses affiliated to the Democratic Nursing Organisation of SA (Denosa) said ...
News
3 years ago

Cosatu spokesperson Sizwe Pamla said the central message of the strike was to highlight the fight against job losses in the public and private sectors.

Pamla said thousands of workers were expected to go on strike.

"Even if workers don't take part, any worker who decides not to go to work tomorrow is protected by the [strike] certificate issued by Nedlac [the National Economic Development and Labour Council]," said Pamla.

The SA Democratic Teachers' Union (Sadtu) said its members were joining the strike to voice their concern about the safety of teachers and pupils at schools being targeted by criminals.

"We will use the march to call for increased safety measures in our schools and to urge communities as well as the government to protect them," the union said.

The department of basic higher education says its "extremely concerned" that schools across the country might be disrupted by the Congress of South ...
News
3 years ago

Nehawu said its members were "greatly affected" by job losses.

Spokesperson Khaya Xaba said workers would join the strike but essential services workers such as doctors and nurses would remain at work.

NUM said that in the mining sector alone, around 40,000 people had been retrenched.

"Mines are closing operations daily. The government must immediately intervene in the mining sector to save workers from greedy mine owners who always leave workers high and dry after using them to up their dividends while working in horrible and unsafe conditions," said spokesperson Luphert Chilwane.

Pamla said they had called on the government and businesses during the job summit last year to sign a moratorium freezing retrenchments.

"There is a huge possibility that workers can lose their jobs. It means government is also not prepared to honour that moratorium that they signed."

The march in Gauteng is expected to start at 9am at Mary Fitzgerald Square in Newtown and proceed to the provincial legislature.

Cosatu has warned the ANC to adhere to its promises made to alliance partners to reconfigure the tripartite alliance or face losing their support.
News
3 years ago

Cosatu in Gauteng on Monday reiterated its rejection of the plan to unbundle power utility Eskom.
News
3 years ago

Cosatu has cautioned the ANC to change its attitude on the proposed "reconfiguration" of the alliance spearheaded by the SACP‚ saying a failure to ...
News
3 years ago
Next Article