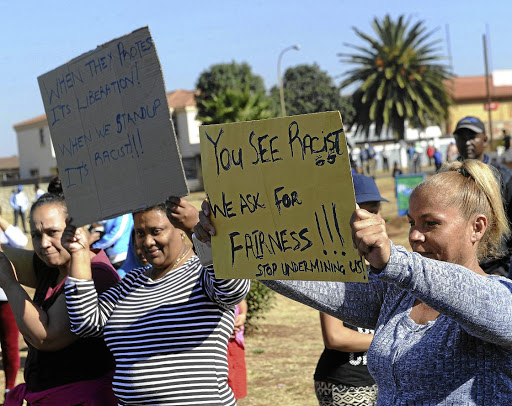 Klipspruit residents took to the streets in protest against the appointment of a black principal at a local school. / Veli Nhlapo.

The Humans Rights Commission has found that most of the school problems in Eldorado Park, south of Johannesburg, are racially influenced.

This was announced by the commission yesterday during the launch of its report on the disruption of learning at Klipspruit West Secondary School and inequality in Eldorado Park and surrounding areas.

The unrest came after the appointment of a black principal at the school was rejected by parents.

Commissioner Andre Gaum said there is sufficient evidence to conclude that there is racial tension in Eldorado Park and the school, which is a microcosm of the community in which it is located.

"It is the commission's finding that the rejection of a black school principal was racially motivated," Gaum said.

Hundreds of pupils in Eldorado Park were left stranded yesterday after teachers went on strike.
News
3 years ago

Racism is not allowed in our schools

The coloured community believes its children cannot be taught by black teachers. This is racism.
Opinion
3 years ago

However, Gaum said the commission accepts submissions by the Greater Eldorado Park United Civic Association that coloureds in the community have real feelings of being marginalised.

Gaum said the sense of being left out, issues of lack of housing, poverty and unemployment in the coloured community are among the causes of riots.

The report also focused on the right to basic education.

The commission directed the Gauteng education department to conduct a survey at schools in the area to identify policies and procedures which deviate from the constitution, especially in respect to racism.

The department has two months to provide its findings.

"The report will help us to resolve some of those differences. However, we feel vindicated because the appointment of the principal was not flawed as we always appoint the best candidate," he said.