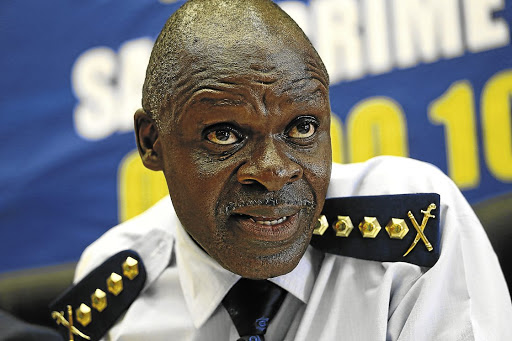 National police commissioner Khehla Sitole has welcomed the arrest on Friday of four people linked to the theft of tablets from a school in Tsakane on Tuesday.
Image: Phill Magakoe

National police commissioner General Khehla Sitole welcomed the arrest on Friday of four alleged robbers and the recovery of 22 tablets and three laptops suspected to have been stolen from Menzi Primary School in Tsakane, Ekurhuleni, on Tuesday.

Sitole said the arrests came less than 48 hours after he assured the nation on Wednesday that he would instruct the police in Gauteng to mobilise the 72-hour activation plan.

The plan entails the mobilisation of critical resources such as police crime intelligence, forensic experts, the Hawks and seasoned investigators from the police’s detective services.

Four suspects have been arrested in connection with a robbery that happened at Menzi Primary School in Tsakane, Ekurhuleni, on Monday night.
News
3 years ago

Sitole said, as in most cases in which the 72-hour activation plan had been mobilised, the plan had borne fruit.

He said the team was led by Crime Intelligence officials to the Johannesburg CBD where four suspects aged between 23 and 38 were arrested.

"This should serve as a warning to other potential criminals that, as police, we will not rest until we are sure that justice prevails.

"As a nation we, as law-abiding citizens, should rally together against such criminality which is infiltrating and disrupting our education system which, fundamentally, is essential for development of a sustainable grand economic strategy for South Africa," Sitole said.

The suspects will appear in Tsakane Magistrate's Court on Monday.