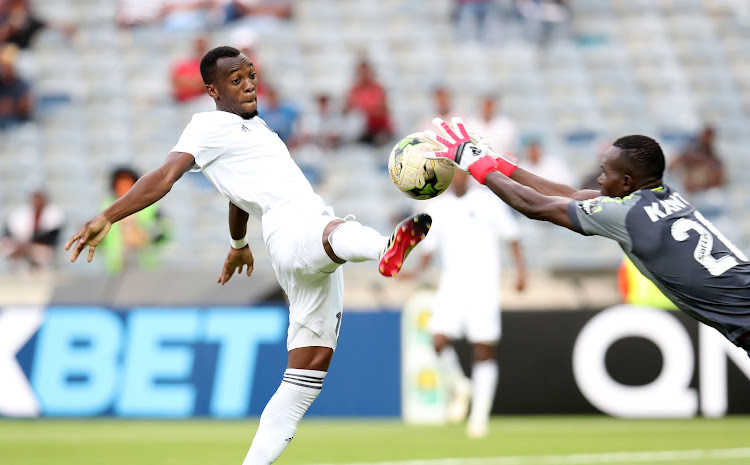 Orlando Pirates' Zambian striker Justin Shonga scored a second half brace to steer the Buccaneers to a comfortable victory at Orlando Stadium. of Orlando Pirates challenged by Abdoulaye Kante of Horoya during the 2019 TOTAL CAF Champions League match between Orlando Pirates and Horoya at the Orlando Stadium, Soweto on the 18 January 2019 ©
Image: Muzi Ntombela/BackpagePix

Thembinkosi Lorch’s lone strike in the first half and Justin Shonga’s incredible brace in the second stanza sealed Orlando Pirates 3-0 victory over Guinean club Horoya FC on match day two of the Caf Champions League at the Orlando Stadium on Friday night.

The win moved the Buccaneers to the top of Group B ahead of the reigning champions Esperance of Tunisia who beat Zimbabwean team FC Platinum 2-0 earlier in Tunis on Friday.

Lorch’s opening goal came in the referee’s optional time in the first half, the Pirates winger benefiting from a defence-splitting pass from midfielder Xola Mlambo after the home team had endured a frustrating 45 minutes against the west Africans.

Lorch still had a lot to do after receiving Mlambo’s pass on the right side of the field as he had to beat two on-rushing Horoya defenders before blasting the ball to the roof of the net past a bemused Abdulaye Kante in the visitor’s goal.

Pirates did try to create as many chances in the first 45 minutes but their penetration was blunted by their lack of movements off the ball and in limited numbers in the box when they had possession.

Before Pirates got the all-important goals Kante and his teammates had frustrated the home side with their time wasting tactics, breaking down all the momentum of the match when the Buccaneers looked to press for the opening goal.

As the game became more and more open in the second half with Horoya, who had never tasted defeat against South African sides in Caf Competitions having drawn all four matches against Mamelodi Sundowns and SuperSport United, Pirates found more openings and Shonga duly punished the visitors in the 74th and 77th minutes.

Shonga’s first goal was mainly due to Horoya’s keeper being caught out of possession and the Zambian striker cleverly toe-poked his strike from way outside the box.

As Horoya continued to push for their own goals Mlambo again delivered a killer pass which deflected off the head of defender Alseny Camara and went straight to Shonga who thundered in the third to give Bucs a deserved emphatic win.

The victory puts Pirates in great position to earn their place in the last eight of the competition, especially if they manage to get another one against Esperance who will visit them on February 2.

Ahead of this match Pirates coach Milutin Sredojevic had emphasised the need to win home matches for Bucs in order to make it to the quarterfinals and his charges responded well to his call.

Muhsin Ertugral believes he can save Maritzburg United

Muhsin Ertugral says his experience of 20 years of coaching in the Premier Soccer League makes him believe that relegation-haunted Maritzburg United ...
Sport
2 years ago