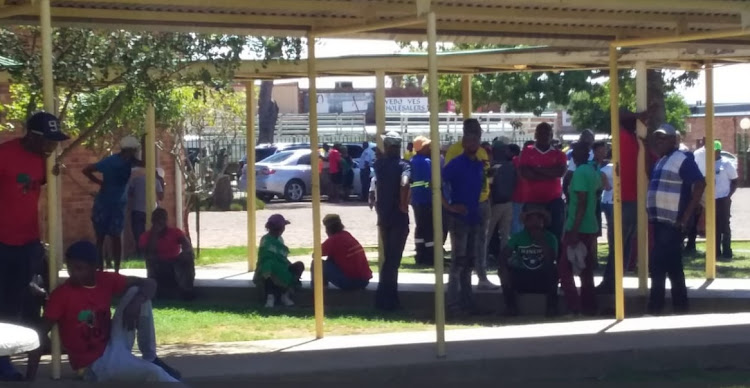 Parents and other community members at the Laerskool Schweizer-Reneke last week, a day after the photograph saga became public.
Image: Boitumelo Tshehle

The North West education department on Monday clarified that armed security was not permitted on any of its school premises.

This follows reports of security being called to Laerskool Schweizer-Reneke, where a protest was held last week.

"We have heard that parents have beefed up security by bringing in people with guns, but these are not permitted. The MEC will be meeting with parents again this week to address the matter," said department spokesperson Freddy Sepeng.

The majority of pupils at Laerskool Schweizer-Reneke in the North West did not go to school on Friday following protest action on Thursday by parents ...
News
2 years ago

Meanwhile, the department was still investigating the circumstances which led to a group of four black Grade R pupils being photographed seated separately from their 18 white classmates on their first day of school last week. The teacher who took the photo was suspended pending an investigation.

Laerskool Schweizer-Reneke last week dismissed any allegations of discrimination or racism at the school.

"A photo taken in a classroom of Schweizer-Reneke Primary is not a reflection of the true character of the school," the school's governing body said in the statement.

"Schweizer-Reneke Primary School is proud of its integrated character. The school's ethos is built on inclusivity as a reflection of the broader South African society," said school governing body chairperson Jozeph du Plessis.

Explaining the picture, Du Plessis said it was a reflection of a" single moment".

He said the school did not tolerate racism.

"The governing body does not condone any distinction based on race. Learners from different backgrounds, including race, religion and language, are not merely accommodated but are fully integrated in all aspects of the school environment," he said.

Black parents at a North West school have been told to take their children to township schools.
News
2 years ago

The teacher at the center of the learner separation controversy at the Laerskool Schweizer-Reneke has been placed on suspension.
News
2 years ago
Next Article