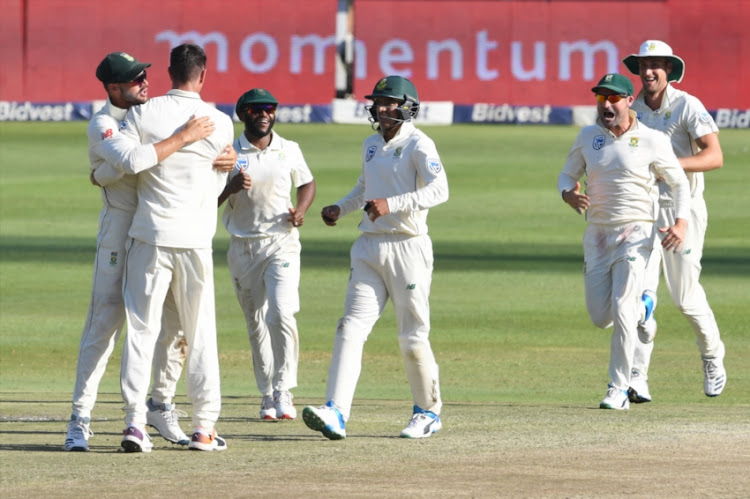 Duanne Olivier and Aiden Markram of the Proteas celebrate the wicket of Azhar Ali of Pakistan during day 3 of the 3rd Castle Lager Test match between South Africa and Pakistan at Bidvest Wanderers Stadium on January 13, 2018 in Johannesburg, South Africa.
Image: Lee Warren/Gallo Images

South Africa only needed the first session to take seven wickets and dismiss Pakistan for 273 for a comprehensive 107 runs victory that secured a 3-0 whitewash over the visitors on the fourth day of this third and final Test match at the Wanderers on Monday.

Playing in front of a near empty Bullring‚ the Proteas fast bowlers continued where they left off on Sunday by not giving Pakistan a sniff in their improbable mission of chipping away at the mammoth extra 228 runs they needed to win.

Pakistan resumed on 153/3 but they could only add 120 runs to their overnight score and their problems began early on when they lost the key wickets of Babar Azam for a hard fought 21‚ and captain Sarfraz Ahmed without scoring inside fifteen minutes.

Azam‚ who was caught by Quinton de Kock behind the stumps‚ and Sarfraz departed from successive balls in the 43rd over from the bowling of highly impressive Duanne Olivier who was on his second hat-trick in this match.

Olivier was duly named the man-of-the-series for the 24 wickets he took in his six completed innings where he was a constant thorn in the side of the Pakistan batsmen with his pace and bounce in Centurion‚ Cape Town and Johannesburg.

To further illustrate Olivier’s impressive performances in this series‚ he ended as the leading wicket taker and he was followed by team-mate Rabada on 17 while Dale Steyn and Muhammad Amir each took 12.

Pakistan’s problems were compounded a few overs later when Proteas stand-in captain Dean Elgar caught an outside nick from Asad Shafiq at second slip from the bowling of Vernon Philander after having scored a hard-fought 65.

It went from bad to worse when Aiden Markram caught Faheem Ashraf at gully for 15 runs from the bowling of Rabada who got his first wicket of the day to leave Pakistan still needing 177 runs to win with three wickets in hand.

The same combination of Rabada and Markram worked like a charm after the first hour and it resulted in the dismissal of Muhammad Amir‚ who departed for only four runs as South Africa closed in on this thumping victory.

Rabada did not need help from any of his team-mates when he caught and bowled Hassan Ali and South Africa ensured victory when Muhammad Abbas was run out by a combination of Zubayr Hamza and De Kock.

With this 3-0 series win‚ South Africa leapfrog England and New Zealand into second in the ICC Test rankings while Pakistan have slipped one place below Sri Lanka into seventh.