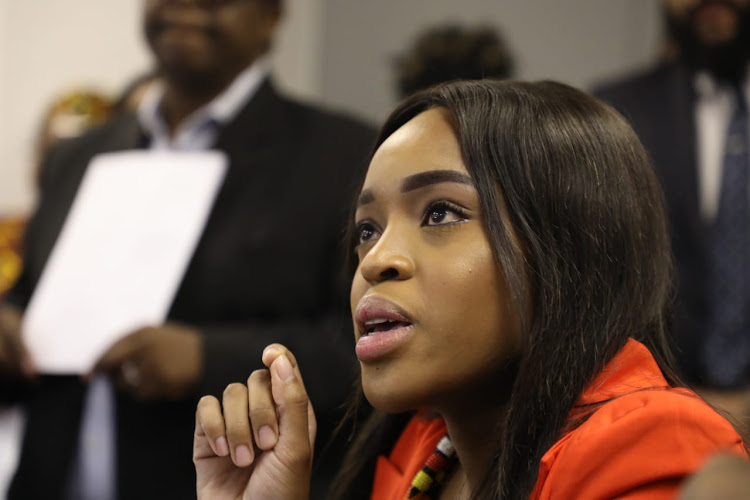 Cheryl Zondi, who was allegedly sexually assaulted by Nigerian televangelist Tim Omotoso has launched a foundation in herself to help victims of sexual abuse.
Image: Thulani Mbele

Cheryl Zondi‚ who was allegedly sexually assaulted by Nigerian televangelist Tim Omotoso‚ has started a foundation to help those who have been sexually abused in sacred spaces.

"Today is a very special day for me and for SA as well‚” she said on Tuesday at the launch of her foundation at the Commission for the Promotion and Protection of the Rights of Cultural‚ Religious and Linguistic Communities (known as the CRL Rights Commission) in Johannesburg.

“It marks the beginning of something remarkable.

"As you all know‚ I spoke out about the sexual abuse and psychological oppression I suffered at the hands of someone who is supposed to be the man of God ... People don't want to believe that their spiritual leaders are capable of such atrocities."

Zondi said she started her foundation because "there is a lack in awareness ... People out there are warned to be careful when they are out at night‚ but they are not necessarily warned when they are going to a church‚ a traditional space‚ ancestral space or any other kind of religious setting".

Zondi said the number of rape cases opened against spiritual leaders since she spoke out has been "astounding".

"I feel it's a wake-up call for everyone who has an ear to hear what is going on in this country. It is extremely upsetting‚" she said.

"Because I know how damaging‚ how life-altering this [sexual assault] is‚ I have decided to start the Cheryl Zondi Foundation and I'm pleased to announce that it's an officially registered NPO. I attached my name and my face to this cause that is so close to my heart that I consider my calling."

Through the foundation‚ Zondi said she wanted to help women who had gone through similar ordeals and to encourage them to speak out without fear of the consequences.

"There are countless victims whose cases might not get the same level of support or media coverage … We [victims] have first-hand experience of the lack in psychological support of victims of sexual abuse in sacred spaces.”

When speaking out against a perpetrator who was a spiritual leader‚ victims of sexual assault in sacred spaces faced a backlash from the leader's followers‚ who were often devoted to "dealing" with the victim.

Cheryl Zondi, the young woman who testified in the pastor Timothy Omotoso trial, has launched a foundation to help survivors of sexual abuse. Zondi said that with this foundation, she aims to assist women and young people who have gone through the same experiences as her in sacred spaces.

"You are immediately exposed when you speak out‚" said Zondi.

"We want to push dramatic changes to the system to make it work for and not against victims‚" she said of her foundation‚ adding that her objective was to eradicate self-shame and blame on victims of sexual assault.

"You need to own your story. The tagline for the Cheryl Zondi Foundation is 'Turning pain into purpose'. There has to be a purpose for your pain."

Zondi made headlines when she faced a grueling cross-examination from Omotoso's legal counsel‚ Peter Daubermann‚ at the start of the trial in the Port Elizabeth High Court.

Under harsh cross-examination‚ the 22-year-old university student told her story of alleged sexual assault‚ which started when she was 14. In doing so she received major support from activist groups around the country.