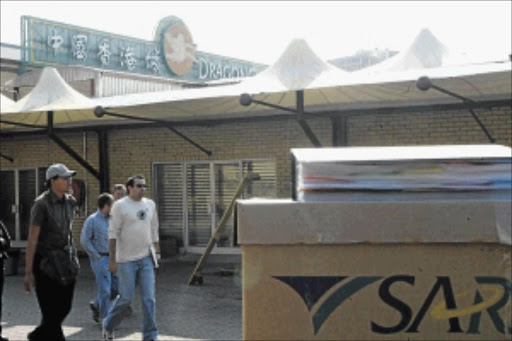 Secondhand cars worth millions of rands and imported illegally into SA are destined for the scrap heap as revenue service Sars clamps down on the illicit economy.

Twenty-six secondhand cars smuggled into the country and seized by Sars were destroyed in Phoenix‚ north of Durban‚ on Friday.

An illegally imported second hand car - seized by Sars - is crushed at a scrapyard in Phoenix @TimesLIVE pic.twitter.com/XyyXFpULJq

"We are sending a message that enough is enough. We are coming after everyone who is undermining our laws and hurting our economy through crime‚" he said.

Theron said‚ "This is part of Sars addressing the scourge of illicit trade and it covers a range of high-risk commodities like tobacco and cigarettes‚ clothing and textiles‚ poultry‚ fuel‚ narcotics and counterfeit goods‚" he said.

"It's about tackling illicit trade in all of its manifestations. We want a nationally coordinated approach‚ which we have seen is starting to bear fruit‚” Theron added.

He expected more illegally imported secondhand vehicles from other provinces to be destroyed.

SARS cracks down on counterfeit clothing

More than R97-million worth of fake clothing was seized by the South African Revenue Service (SARS) .
Business
4 years ago

Moyane is taking his fight to be reinstated as Sars commissioner to the Constitutional Court after being jettisoned from the revenue service by President Cyril Ramaphosa.

Ramaphosa fired Moyane after judge Robert Nugent‚ who heads the Sars commission‚ submitted an interim report recommending that he be dismissed for the good of the tax body and SA.

The revenue shortfall has ballooned to R100bn.

Before Nugent filed his interim report‚ the commission heard‚ among a raft of things‚ that Moyane had instructed the Sars enforcement division to halt inspections of tobacco companies‚ a move that set back the fight against illegal tobacco.

The crushed cars‚ the first casualties of a clear fightback strategy by Sars‚ will be sold for scrap.