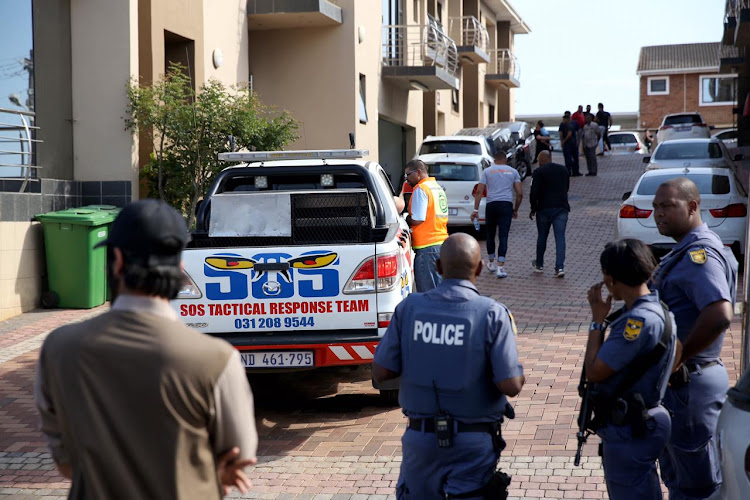 Police and private security responded to an apparent house robbery in Durban on Wednesday in which one man was wounded in an exchange of gunfire.
Image: Thuli Dlamini

An Overport, Durban, man who stumbled upon a gang of heavily armed house robbers was wounded as he traded fire with the gunmen on Wednesday.

The man, who has not yet been named, was rushed to a nearby hospital after he was injured in the exchange - a bullet grazing his shoulder.

It is understood that he had gone to the aid of a neighbour after noticing a suspicious car parked near his Essendene Road home.

This is the third shooting on Durban’s ridge in less than 24 hours.

Three people died after a shooting at the Lombardy informal settlement‚ in the north of Johannesburg‚ at the weekend.
News
3 years ago

Police spokesman Lieutenant-Colonel Thulani Zwane said that a group of gunmen had stormed a home, holding up the owner at gunpoint.

“Once they were inside they accosted the owner and they took items of value, including four watches.

“When the neighbour noticed the car he came to investigate and the men fired on him. He was armed and returned fire,” Zwane said.

It is believed that the man may have wounded his attackers as he loosed off a salvo of shotgun fire.

Rescue Care spokesman Garrith Jamieson said the man had sustained superficial wounds and was in a stable condition.

This incident follows the fatal shooting of a man in Musgrave Avenue on Tuesday night, a bloody end to what is believed to have been a hijacking gone awry. While police were still busy processing that crime scene, a gang of suspected house robbers opened fire on a security guard in Morningside’s Hollander Crescent.

Zwane said that no arrests had been made yet.