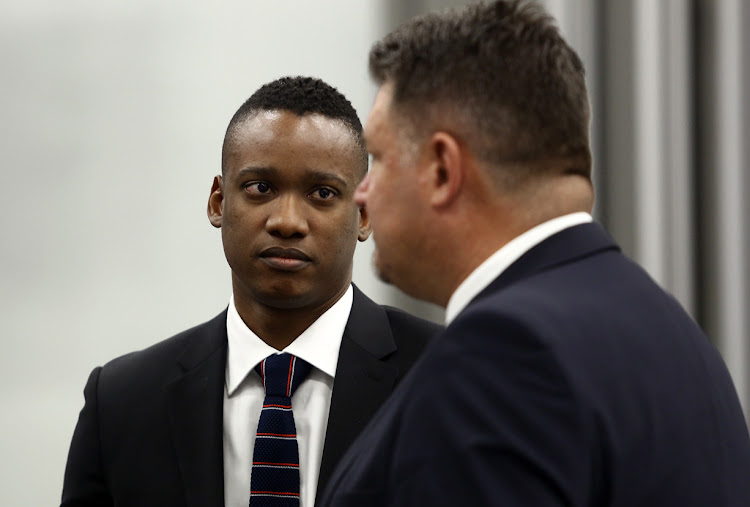 Duduzane Zuma listening to his lawyer at the state capture commission on Wednesday
Image: Masi Losi

Former president Jacob Zuma’s son Duduzane arrived unexpectedly at the Commission of Inquiry into State Capture in Johannesburg on Wednesday.

Accompanied by his legal team‚ Zuma's son is expected to “seek clarity” from the commission on the postponement of former deputy finance minister Mcebisi Jonas’s cross-examination.

His lawyers had successfully applied for the right to cross-examine Jonas about his testimony that a Gupta brother had tried to bribe and threaten him into taking over the post of finance minister from Nhlanhla Nene.

Duduzane Zuma maintains this is a lie‚ and has stated that it was in fact himself and arms deal advisor Fana Hlongwane who met with Jonas over rumours that Hlongwane was trying to blackmail him.

Zuma jr has agreed to testify to the state capture inquiry about these claims‚ as has Hlongwane.

Former President Jacob Zuma has again come to court to support his son Duduzane‚ whose trial date for culpable homicide has been provisionally set ...
News
3 years ago

Businessman and former government spokesperson Mzwanele Manyi was also present at the commission on Wednesday morning.

“I am here to do two things‚" said Manyi. "I am here at the request of the commission to respond to the text I sent to Phumla [Williams].

"I have asked them that as I do that‚ can I respond to the allegation that she made when she presented her testimony on August 31. They have agreed to that‚” Manyi explained.

In August‚ Williams‚ the acting director-general of GCIS‚ told commission chair deputy judge Raymond Zondo that she received an sms from Manyi‚ telling her not to blame him for the controversial The New Age (TNA) breakfasts that aired on SABC. She was testifying about that at the time.