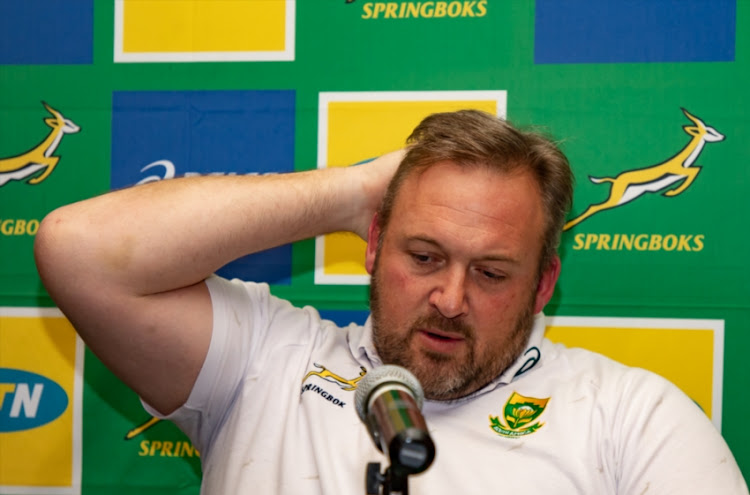 Springbok forwards coach Matt Proudfoot‚ who earned four caps for Scotland in the early 2000s‚ expects a different challenge to what they had last week when South Africa meet the Scots at Murrayfield on Saturday.

Scotland‚ under coach Gregor Townsend‚ have evolved their game from a set piece-dominated unit to a team that plays more expansively.

The Boks have won the last five between the sides‚ the last coming in Newcastle at Rugby World Cup 2015 when SA won 34-16‚ but this is a very different Scotland to the one they faced three years ago.

In the past two seasons Scotland have won eight of their last nine Tests at home – the only defeat was a narrow 22-17 loss against the All Blacks.

Since that loss to the world champions Scotland have beaten Australia‚ France‚ England and Fiji at home.

In flyhalf Finn Russell and fullback Stuart Hogg‚ Scotland has two of the most explosive backs in the northern hemisphere game.

Townsend’s men won’t have missed how the Boks’ defence has been exposed out wide at times this season.

Proudfoot’s praise of Scotland was not hollow. They are a genuine threat.

“They are going to be difficult. They are a very good side‚” Proudfoot said.

“What Gregor has done with the team is give them a lot of momentum. I think the resources are well utilised and they are a tough side to beat. “The challenge at the breakdown and the contact point is always crucial in Test match rugby.

"The difference (compared to the French game) is that Scotland are probably a lot better technically in the defensive contact situations‚ while the French were very physical.” Proudfoot also lauded some of the other Scottish strengths: “Their continuity play and their ability to apply a kicking game‚ which allow them to counter off the back of that‚ are some other strong points. “They are also a very disciplined side who are able to defend for long phases‚ so you don’t get to break them down easily. That means you must have a lot of patience against them.”

Scotland are also more streetwise these days as hooker Fraser Brown revealed when talking to the media in Edinburgh this week.

International teams always living on the edge of the law to gain an advantage‚ which has resulted in some controversial refereeing decisions in the past two weeks‚ and Brown expected no different this weekend.

“Our tactic at the weekend was to move Fiji around (Scotland won 54-17) and try and be more clinical in areas like scrum and maul and exploit weaknesses.

“We’ll review South Africa and look to exploit them‚ whether they’ve got a big pack or not. We’re focusing hard on our own technique and tactics.”