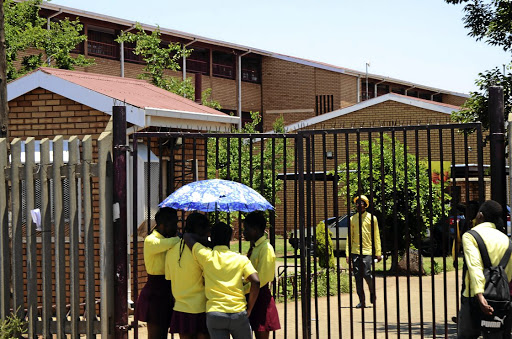 Mpontsheng Secondary in Katlehong is hit by a cheating scandal.
Image: Mduduzi Ndzingi

An Ekurhuleni school principal embroiled in alleged exam cheating has been removed as the chief invigilator and also faces suspension.

Steven Sihadi, a principal at Mpontsheng secondary school in Katlehong, allegedly went into a geography exam room on October 30 where he apparently told his grade 12 pupils which questions to answer.

The pupils were writing geography paper 1, which Sihadi teaches at his school. He apparently walked into the exam room and directed pupils to pay attention to specific sections of the paper.

The incident came into light when a parent complained to Umalusi, the organisation responsible for quality assurance of the National Senior Certificate (NSC) matric exam, that her child was given answers by the principal.

So far, so good for matric exams

There are about 796 542 pupils participating in the 2018 NSC examinations.
News
3 years ago

The matter was then referred to the department of education. This is the first cheating scandal to be reported during the 2018 matric exams. Basic education spokesperson Elijah Mhlanga said the principal was being investigated.

"Several things can happen to him if found guilty, but for now there are two processes we are following. We have removed him as the chief invigilator and the department is working on suspending him."

Mhlanga said invigilators were not allowed into the exam centre if they were teaching the subject that was being written.

Yesterday, grade 12 pupils at the school said they were worried about their future.

Prepare for your exams, for the world has a habit of making a way for those who know where they are going.
Opinion
3 years ago

"The principal never gave us answers but suggested that we should rather choose settlement and economic geography and mid latitude cyclone. He just gave us better options to answer," said an 18-year-old girl.

Another pupil said: "I studied very hard for geography and it would be bad if our results were to be withheld. This will also reflect badly on our school, because if we get a 100% pass rate, people will think we have cheated."

Sihadi referred all the questions to the department. However, an official at the school said they were shocked to hear about the allegations.

"We had 117 pupils who were writing geography that day. They were writing in two halls with two invigilators and a district monitor. I think this is about internal squabbles happening at the school," the school official said.