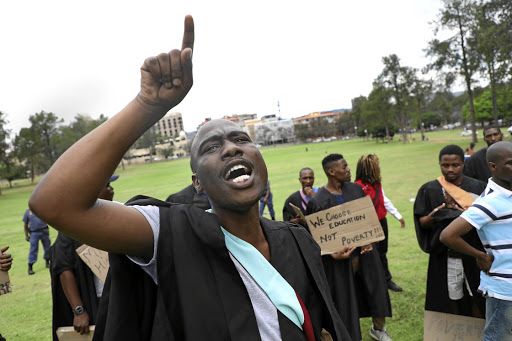 Unemployed graduates at the Union Buildings in Pretoria where they demanded that the government make job opportunities for the unemployed youths.
Image: Thulani Mbele

Nkululeko Ndlovu wore his graduation gown on the lawns of Union Buildings in Pretoria yesterday to make a statement about his six years' struggle to find a job.

Ndlovu, 28, from Ulundi in KwaZulu-Natal graduated six years ago with a B-tech accounting degree and has been unemployed since.

On Monday, Ndlovu joined a group of 15 unemployed graduates that boarded a bus from Durban to Pretoria to hand over a memorandum of demands to President Cyril Ramaphosa.

After passing his matric, Ndlovu had to work in a factory to raise money to pursue his studies at university.

Forty-nine years after submitting his Master of Laws (LLM) degree thesis and having it refused because it quoted a banned person‚ Prof Raymond ...
News
3 years ago

"My mother is unemployed and we all depend on her government grant," he said.

"I was lucky to get help from the National Student Financial Aid Scheme (Nsfas) for my studies. Six years down the line my degree feels useless. All I want to say to the president is that I want to be employed and able to look after my family."

He accused the government of "playing with young people's lives" by offering two- year internship programmes while prospective employers looked for three years experience from graduates.

"Our families sacrificed the least they had to see us through school," he said.

Another graduate, Lindokuhle Khumalo, 24, said he lost his mother while doing first year at university in 2014 and this put more pressure on him to provide for the family.

"I have been applying for employment for four years now with no luck. There is no one working at home. I am now that graduate who sweeps people's floors to put food on the table," Khumalo said.

"The president should make plans for unemployed graduates because depression will kill us," he said.

A government official accepted the memorandum on behalf of Ramaphosa and promised to respond to the demands after seven days.