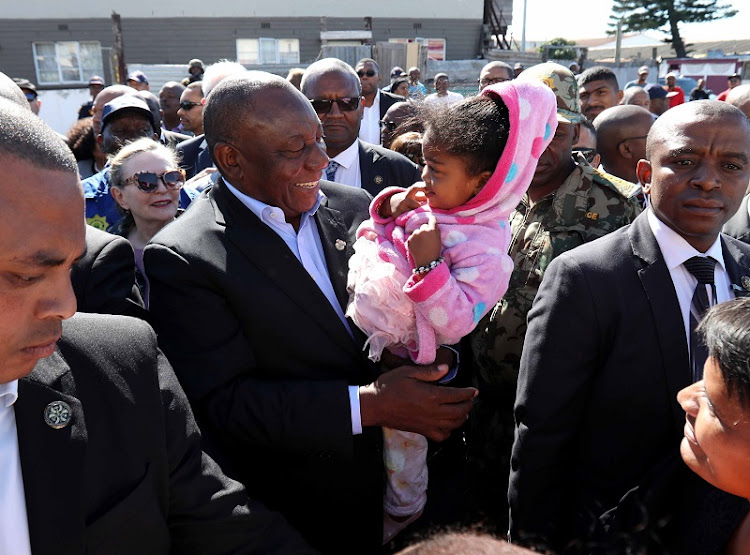 President Cyril Ramaphosa interacts with the community of Hanover Park in Cape Town ahead of the launch of the SAPS Anti Gang Unit in the Western Cape.
Image: Esa Alexander

President Cyril Ramaphosa walked through Hanover Park on Friday declaring that the shooting had stopped thanks to the work of the new police anti-gang unit. And he was right.

But inside his large security cordon‚ which was surrounded by a larger and more heavily armed ring of men in military fatigues and balaclavas‚ Ramaphosa had a sanitised view of the violence on the Cape Flats.

He offered his condolences to the 28-year-old’s grieving father‚ Mogamat Alwie‚ and told community members that “the guns have fallen silent”.

The weeks after Noordien’s death have indeed brought a semblance of peace — which simply means an absence of gunfire — to the community.

But as the president entered a courtyard between four blocks of flats and started addressing residents with the words “the government is behind you”‚ the dynamics which make the Cape Flats so difficult to police played out around him.

Local gang bosses don’t live in the flats‚ but they came to watch the parade and to see who was talking to the police‚ reporters or the president. Residents watched the president from stairwells and balconies.

Ramaphosa’s language delighted them. “He’s speaking Afrikaans!” said one. “Of course‚ it’s our mother tongue‚” said her husband. “That is what a king does. He comes out to his people and puts the interests of his people on his heart.”

Since the anti-gang unit had started patrolling Hanover Park a few weeks before its official launch on Friday‚ there had been almost no shooting incidents‚ residents said‚ and children were able to play outside.

“It makes kids and parents restful. When there’s a shooting‚ everyone runs‚ you must see it ... You just pull the nearest child into your home no matter whose it is‚” said a resident who did not want to be named because of what he said next: “They first need to sort out the corrupt police.”

Then they explained what Ramaphosa could not see. On the opposite side of the courtyard where the president was greeting Alwie sat a man known as Grysie.

A metro police officer approached him‚ greeted him respectfully and laughed at his joke.

Then a uniformed SAPS officer greeted him with the same respect.

Two young men appeared briefly in camera in the Athlone Magistrate’s Court on Monday in connection with the murder of 20-year-old Gift of the Givers ...
News
3 years ago

Asked what he thought about gangsterism in his community‚ the resident said: “They will never stop it. In there is another gangster‚” he added‚ pointing at the abdomen of his pregnant wife. She laughed.

Asked whether he had any advice on how to take down the gangs‚ he said the government needed to create jobs‚ invest in social upliftment programmes and build sport and recreation facilities.

“The [drug] merchants do good things for the community. They care for them sometimes‚” he said.

The anti-gang unit is made up of police officers from different police stations and have already had major successes in Cape Town.

Besides many arrests and seizures of firearms and drugs‚ their speedy response to Tuesday’s murder of lawyer Pete Mihalik outside his child’s school in Green Point led to the arrest of two suspected hitmen.

President Cyril Ramaphosa took a walkabout among Hanover Park residents in the same street where Gift of the Givers volunteer Ameerodien Noordien was shot and killed by gang fire. Members of the community shook hands with the president as Ramaphosa announced a new anti-gang strategy for the area on November 2 2018.