Father confirms son was shot in the head 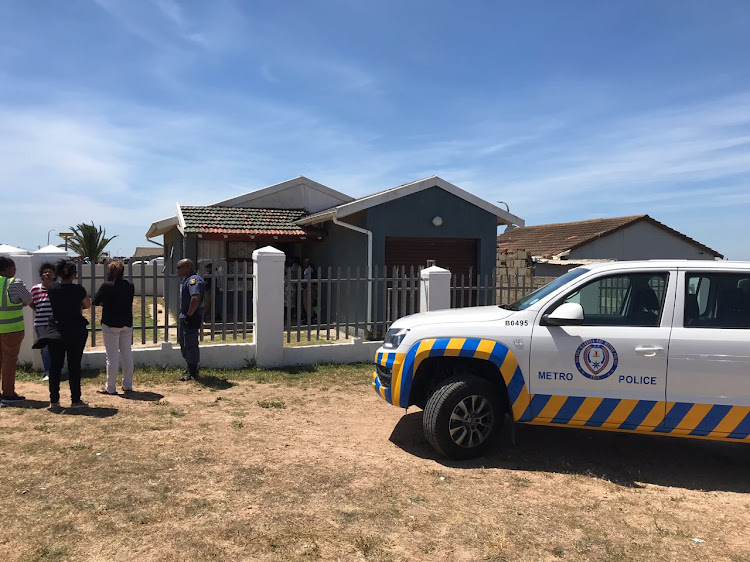 The house, in Booysen Park, were two youngsters were killed on Friday night
Image: Devon Koen

A crowd of nearly a 100 people including police officials, Bethelsdorp Community Policing Forum, Citizens Against Crime and Sector Police gathered around the Booysen Park home on Saturday where a teenage boy and eight-year-old girl were shot and killed on Friday night.

Five others were injured in the shooting.

While the motive behind the attack remains unclear, Bethelsdorp Community Policing Forum’s Karen Kemp, who was at the scene, said it was unclear if it was a robbery or if it was a targeted shooting.

“We are not sure if it was a robbery or if there was a target inside the house,” Kemp said.

According to Kemp, a car parked outside the house on the corner of Heratio and Capulet Streets had also been shot at even though no one was inside.

Member of the Citizens Against Crime Forum, who was decked out in a bulletproof vest, Sulaiman Plaatjies, said people living in the Northern Areas were “gatvol” of the amount of shootings taking place in the area.

Plaatjies said a big problem in combating the scourge of crime in the area was that many people were afraid to come forward with information.

“People are too scared to talk, if they see something they are too afraid to talk,” Plaatjies said.

It is alleged that at around 9:20pm two armed gunmen kicked down the door of the house.According to police spokesperson Colonel Priscilla Naidu, a gold necklace was ripped off the neck of a 26-year-old man and two cellphones were stolen before the attackers opened fire on the occupants of the house.

A driver who mowed down a group of young people‚ killing four last year‚ wants to enter into a plea bargain with the state.
News
4 years ago

One woman who lives in the area and did not want to be named said one woman, 24, was unharmed and survived the attack.

“She was lying on the couch watching TV when the men stormed into the house. One of the other people who were shot fell on top of her and that’s how she survived,” the woman claimed.

The father of Deacon van Rooyen, 14, who was also at the scene on Saturday afternoon, Angelo Sharpe, 43, confirmed his son had been shot in the head and had died.

The 24-year old-survivor declines to speak to the media. Ruann Willemse, 8, was shot and killed.

Naidu said officials from the police’s crime intervention team were actively investigating the motive of the attack and called for anyone with further information to come forward.