Men charged with killing Pete Mihalik are from KZN 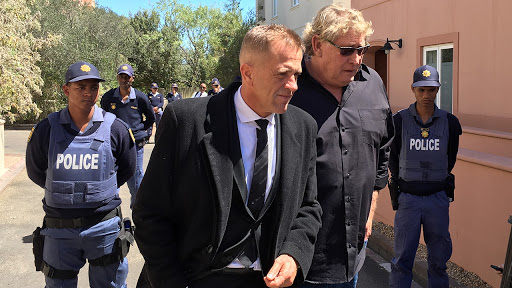 Sizwe Niyalala‚ 26‚ and Nkosinathi Khumalo‚ 31‚ were charged with murder‚ attempted murder and possession of an illegal firearm and ammunition. They were not asked to plead.

Prosecutor Hillary Boosen asked that the matter be postponed for seven days for further investigation. She asked that the men be held at Sea Point police station because their lives could be in danger if they were sent to prison.

Heavily armed members of the police anti-gang unit threw a tight security cordon around the court for the men’s appearance.

The attempted murder charge related to Mihalik’s eight-year-old son‚ who was hit by one of two bullets fired into the advocate’s car outside Reddam House Atlantic Seaboard in Green Point on Tuesday.

Mihalik‚ 50‚ was killed in a hit as he dropped his son and teenage daughter at 7.35am. One of the killers walked up to Mihalik’s Mercedes-Benz and fired two shots through the driver’s door window.

The men who appeared in court were arrested separately on Tuesday by members of the anti-gang unit‚ which is to be officially launched on Friday by President Cyril Ramaphosa.

Over his 20-plus years as an advocate‚ Mihalik represented numerous gangsters‚ and there are widespread suspicions that his murder was linked to one of the cases he was involved in.

The anti-gang unit launch will take place in Hanover Park‚ one of the Cape Flats communities most severely affected by gangsterism and the violence it causes.

Reneilwe Serero‚ the spokesperson for police minister Bheki Cele‚ said the unit was made up of members from specialised units “with an objective to dislodge and terminally weaken the capacity of the gangs‚ and to disorganise and fundamentally disable the criminal economy linked to gangsterism‚ including drug and firearm supply lines or other identified commodities”. Serero said the unit had been in operation since October 8 in Nyanga‚ Bonteheuwel and Bishop Lavis. “It will continue to be in full operation in the Peninsula area until communities in the greater Western Cape experience a return to normality.”

Ramaphosa’s participation in the launch “indicates his commitment and that of government at large to ensure that communities are able to live in safety while criminals are subjected to the full weight of the law”.