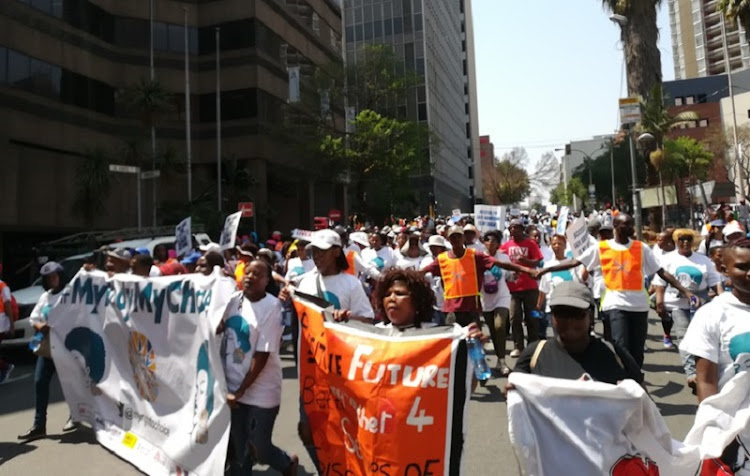 Hundreds of people from various civil society organisations marched through the streets of Braamfontein on Friday to increase awareness about unsafe abortion and reproductive rights.
Image: Zoë Postman

On Friday morning‚ hundreds of people from various civil society organisations marched from Braamfontein to Newtown to raise awareness about reproductive rights and unsafe abortions in South Africa.

The organisations wrote a petition signed by about 200 people. It said that despite abortion being legal in South Africa‚ many women still struggle to access safe abortions. “This is due to severe stigma‚ refusal by health care providers due to their own religious or moral beliefs‚ lack of information‚ poor infrastructure and limited availability of safe abortion services‚” read the petition. The organisations intend to hand the petition to the national government.

The petition said government must urgently finalise national termination of pregnancy guidelines‚ ensure that everyone has access to contraceptives‚ take action against illegal abortion providers and celebrate abortion provider appreciation day on 10 March annually. It also said the government must engage with the United States (US) government on the urgent need to repeal the global gag rule in South Africa. According to the US based Centre for Health and Gender Equity‚ the rule means that NGOs receiving US family planning funds “cannot inform the public or educate their government on the need to make safe abortion available‚ provide legal abortion services‚ or provide advice on where to get an abortion”.

The petition urged the national and provincial departments of health to do more to ensure that women have access to safe abortions because “when a woman is denied unencumbered access to these services‚ her agency and the right to make decisions about her body are limited”.

A statement released by Gender Links on Thursday about the march said that safe and legal abortion is an urgent priority in Southern Africa. “According to the World Health Organisation (WHO)‚ safe abortions are one of the safest and simplest medical procedures in existence. Yet abortion is mostly illegal and highly frowned upon in most Southern African countries‚” read the statement.

It said despite South Africa’s strong pro-abortion laws‚ only 7% of the country’s health facilities provide abortions.

Chairperson of the TAC Sibongile Tshabalala told GroundUp that most local clinics‚ particularly in poorer communities‚ do not perform abortions if the woman has been pregnant for over 12 weeks. She said they are referred to hospitals that are far away from where they live which makes it inaccessible to them.

“If the woman is unemployed‚ she will not be able to travel that far because it is expensive so she might end up getting an illegal abortion … This is a threat to that woman’s health and safety‚” said Tshabalala.

“We have a right as women to choose what we do with our bodies without being questioned … We cannot allow men in power who do not understand women to continue making decisions on our behalf‚” she said.

The bill was written by MP Cherrylyn Dudley‚ under advice from conservative group Doctors for Life.
News
4 years ago
Next Article