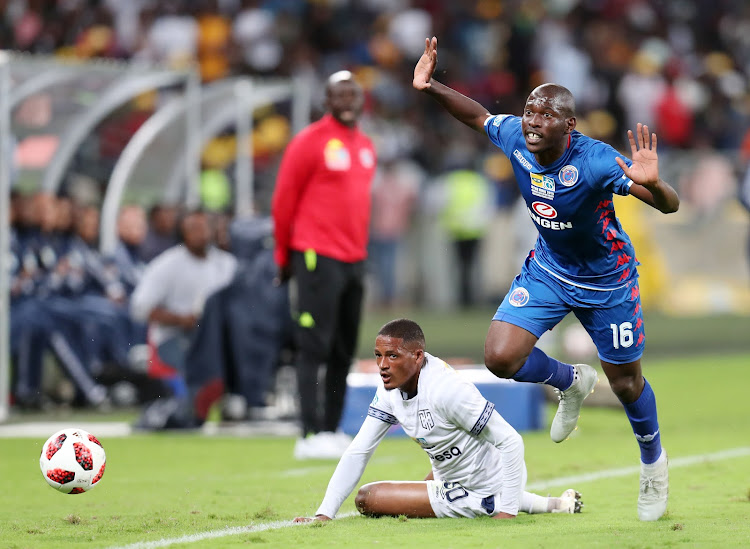 Graig Martin of Cape Town City is fouled by Aubrey Modiba of SuperSport United during the MTN8 final match at the Moses Mabhida Stadium, Durban on September 29, 2018.
Image: Muzi Ntombela/BackpagePix

For a second successive year penalties again settled the outcome of the MTN8, but this time Cape Town City came out on the right end of the result to win Saturday’s final at the Moses Mabhida Stadium.

Giant goalkeeper Peter Leeuwenburgh made two saves in the post-match shootout as Thabo Nodada converted the winning kick for an easy win in the shootout .

But it needed not go all the way to kicks again as City dominated a limp SuperSport but could not finish the game through two hours of leg-sapping action.

City twice hit the woodwork as they dominated the game and should have won comfortably in the opening 90 minutes, never mind the additional 30 minutes of extra time.

The game started well with a busy first half but a pedestrian second half as caution seemed to be the watchword, particularly from an uninspired-looking SuperSport, who approached the game with more circumspection than their opponents.

They might have been awarded a penalty after 21 minutes when SuperSport centre back Clayton Daniels looked to handle the ball as his slid in to try and block Thamsanqa Mkhize’s cross but referee Eketsang Setloboko did not look like he was going to make that big a call on such a stage.

Thabo Nodada hit the bottom of the post with a dipping shot just past the half hour mark and the rebound got stuck in Siphelele Mthembu’s feet when a quicker thinking striker would have snapped up the chance with goalkeeper Ronwen Williams still scrambling to get into place.

And two minutes after that, Ayanda Patosi should have converted from close range but went wide after a breakaway one-two with Gift Links.

Soon after break, Links provided another counter-attack cross that hung for Craig Martin to head goalward but it went over the crossbar.

Edmilson was fed by Patosi for another City chance in the 56th minute with the Mozambican fullback cutting inside and hitting his shot with his weaker right foot, forcing Williams into a good save.

The game had gone quite by the time City then conjoured up their best chance in the 86th minute with Links swinging his foot across a bobbling cross from Edmilson, with the shot from the teenager striking the crossbar and bouncing out.

Just near the end of extra time, Riyaad Norodien’s dipping freekick also came close for City, although by then they looked resigned to the fact the game was headed to penalties.

At the other end, and early on in the game, Fagrie Lakay twice caught the City defenders for pace and could have set up two first half opportunities and SuperSport also did test City goalkeeper Peter Leeuwenburgh when Putsche cleared straight at Evans Rusike, who took the ball off his chest, advanced a few years and then shot at goal, forcing the tall ‘keeper into a diving save.

Lakay had to go off before the break with a hamstring injury and with him went a lot of SuperSport’s attacking initiative as they made little contribution to the game through two hours of on-field action.

It was a first title for Benni McCarthy as a coach and a second in three years for the new franchise from the Mother City.

AmaZulu docked six points‚ to one point‚ for ignoring Fifa

AmaZulu were plunged to rock bottom of the Absa Premiership log on Friday when they were docked six points by the Premier Soccer League (PSL) for ...
Sport
3 years ago

There is almost no chance that Tokelo Rantie will emerge as a surprise package for Cape Town City in Saturday’s MTN8 final as his intensive training ...
Sport
3 years ago
Next Article