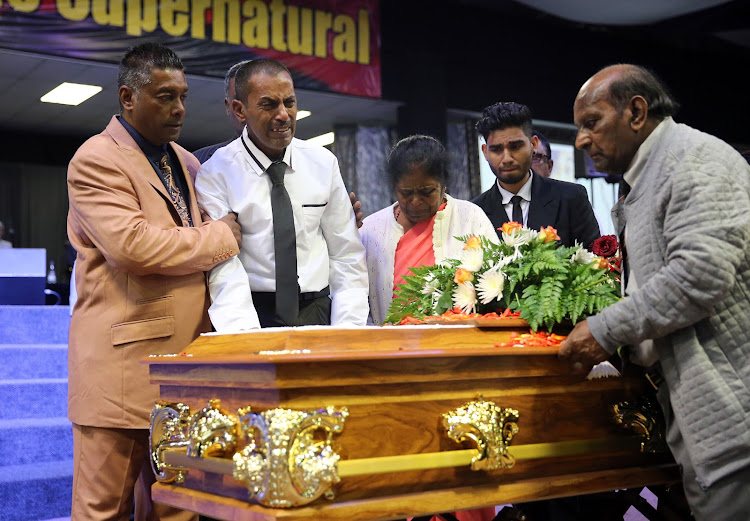 Father and husband Sagren Govindammy, in a white shirt and black tie, mourns as he pays his last respects to the triple murder victims, his wife Jane Govindsamy and his two daughters Denisha and Nikita as they are laid to rest after a funeral service held at the Faith Revival Centre in Durban yesterday
Image: RAJESH JANTILAL

As Durban father Sagren Govindsamy kissed his wife and two daughters for the last time‚ mourners at the Faith Revival Church on Saturday questioned why they had been killed so callously.

Even KwaZulu-Natal Human Settlement MEC Ravi Pillay could not understand the "devastating crime" that claimed the lives of Jane‚ 22-year-old Denisha and 16-year-old Rackelle.

"We cannot fathom the act of a human being to do this not just once‚ not just twice but thrice‚" he said.

Jane's sister‚ Annie Ritchal‚ said her family could not come to terms with the circumstances in which the three lives had been wiped out.

Holding back tears‚ she said Jane's siblings were broken and shocked.

On the morning of September 21 ‚ Govindsamy entered his flat through a window as no one answered the door the night before when he returned from working a 2pm to 10pm shift.

He told police that he did not have house keys so he knocked on the door. When his wife and two daughters did not answer‚ he left to spend the night at his mother's house.

When he entered the flat on Friday morning‚ he found his wife's lifeless body in her bedroom and 16-year-old Rackelle's body in the second bedroom. They had both been gagged.

Sniffer dogs had located Denisha's body hidden in a wardrobe in the bedroom.

When Police Minister Bheki Cele visited the family‚ he revealed that the alleged killer was known to the family.

Former tow truck driver Colin Pillay was arrested and appeared in court on three charges of murder on Tuesday.

At the funeral service on Saturday‚ Jane was described as a hardworking woman‚ who put her family first.

She was an administration clerk for a logistics company and loved sewing in her spare time.

"It has been difficult to see her empty chair at her desk‚" she said.

Friends spoke of Rakelle's love for unicorns and her desire to study chemical engineering or medicine when she completed her schooling. Denisha's inconsolable fiancé‚ Macaelin Padaychee‚ held onto his parents as he stood next to her casket.

The couple planned to marry next year.

"Macaelin‚ we are sorry that you have lost the love of your life‚" said Pastor Mervyn Reddy during his speech at the service.