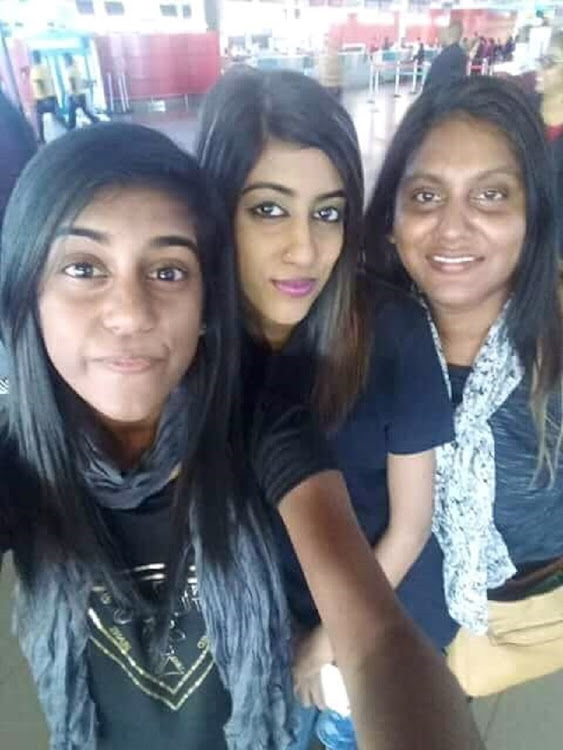 The three women that were murdered in triple murder in Phoenix, Durban. LEFT TO RIGHT: Rackelle Govindsamy‚ 16, Denisha Govindsamy, 22, and their mother Jane Govender‚ 44.
Image: FACEBOOK

Family and friends will pay their last respects to a Durban mother and her two daughters‚ who were brutally murdered in their flat last week‚ at the Faith Revival Church on Saturday morning.

Sagren Govindsamy told SowetanLIVE he did not know how he was going to cope at the funeral service of his wife Jane‚ and his two daughters‚ Denisha‚ 22‚ and 16-year-old Rackelle.

"We have been making funeral arrangements over the past few days. It doesn't seem real. I don't know how I am going to handle seeing their bodies at the funeral. It will become too real for me‚" he said.

On the morning of September 21‚ Govindsamy entered his flat through a window as no one answered the door the night before when he returned from working a 2pm to 10pm shift.

He told police that he did not have house keys so he knocked on the door. When his wife and two daughters did not answer‚ he left to spend the night at his mother's house.

When he entered the flat on Friday morning‚ he found his wife's lifeless body in her bedroom and 16-year-old Rackelle's body in the second bedroom. They both had been gagged.

Sniffer dogs had located Denisha's body hidden in a wardrobe in the bedroom.

When police minister Bheki Cele visited the family‚ he revealed that the alleged killer was known to the family.

Former tow truck driver Colin Pillay was arrested and appeared in court on three charges of murder on Tuesday.

Govindsamy's sister‚ Thaveshni Naidoo‚ told SowetanLIVE that the family felt like they were living a nightmare that they could not wake up from.

"If they had died in a car crash or of an illness‚ it would be different. But now we have to face the way that they died. And we have so many questions.

"Did they suffer? Why were they killed? Our family will never recover. My brother has lost his family and is now alone‚" she said.

One of the three women who were murdered in Phoenix‚ Durban‚ on Friday was set to get married early next year and planned on going to Thailand for ...
News
3 years ago

Rydal Park Secondary School management said pupils would pay tribute to Rackelle‚ who had been a Grade 11 pupil at the Phoenix school‚ at the funeral.

"He is not coping. He cannot accept this. Denisha was his everything‚" Vurden said.

The couple were planning to get married next year.