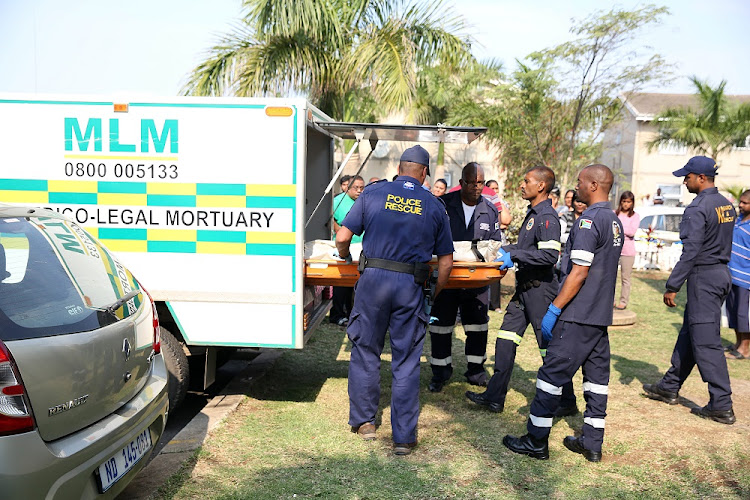 Three women were found dead in their flat in Phoenix in Durban on Friday morning.
Image: Thuli Dlamini

The man accused of committing a gruesome Phoenix triple murder will spend eight days behind bars before he can make a bid for bail.

Collin Pillay was arrested on Saturday night in connection with the murders of Phoenix mother Jane Govender‚ 44‚ and her two daughters‚ Denisha‚ 22‚ and 16-year-old Rackelle‚ who were found dead in their Tasvir Mansion flat on Friday.

Pillay’s first appearance in the Verulam Magistrate’s Court‚ sitting at the Verulam Traffic Court on Tuesday‚ was delayed after he suffered an anxiety attack and had to be treated by paramedics.

The case was delayed by 30 minutes‚ while Pillay recovered.

When the matter eventually got under way‚ his attorney‚ Chris Gounden‚ vehemently objected to the media capturing pictures and footage of Pillay in the dock.

Gounden told the court that published photographs and footage of Pillay could compromise his safety.

State prosecutor San Bhartu had no objection‚ but magistrate Irfan Khalil placed a ban on images and footage of the accused‚ mainly because of the issue of “personal safety”.

Bhartu told the court that the state intended to oppose bail‚ alleging that the three murders were “planned and premeditated”.

Sagren Govindsamy appeared dazed and overwhelmed as he sat quietly while community members gathered for a small protest.
News
3 years ago

Bhartu asked that the bail hearing be postponed to October 16 because the investigating officer needed to conduct more investigations crucial to the matter.

But Gounden argued that “the issue of bail is urgent”.

“The accused should not be prejudiced because the investigating officer is not available‚” said Gounden.

He also objected to Pillay being held in custody at the Phoenix police station cells‚ claiming his client had been assaulted‚ was fearful for his life‚ suffered a heart condition and there were no proper medical facilities there.

One of Gounden’s other arguments for Pillay to be remanded in custody to Westville Prison‚ was that there was no television at Phoenix.

Gounden told the court Pillay had suffered injury to his chest from the alleged assault.

Pillay was asked by the magistrate to show him the marks on his chest.

Gounden asked that Pillay be placed in isolation at Westville Prison.

Prosecutor Bhartu told the court: “Regarding the marks‚ the accused suffered an anxiety attack. He received treatment from paramedics‚ his chest was rubbed while he was treated. He was placed on a drip and refused hospital treatment.”

In a letter submitted to court as part of the charge sheet‚ police asked that Pillay be held in custody at Phoenix station‚ to allow them to verify his residential address‚ his whereabouts at the time of the killings and also allow them to look for other possible suspects‚ if any.

One of the three women who were murdered in Phoenix‚ Durban‚ on Friday was set to get married early next year and planned on going to Thailand for ...
News
3 years ago

Magistrate Khalil ruled that Pillay be held at Westville Prison. He said it was not his place to decide on whether a person should be kept in isolation‚ adding that it was at the discretion of the Department of Correctional Services.

The case was adjourned to October 3 for a formal bail application.

Earlier Sagren Govindsamy‚ husband and father of the three slain women‚ sat with his head in his hands outside the courthouse as he waited for Pillay’s appearance.

Govindsamy appeared dazed and overwhelmed as he sat quietly while community members gathered for a small protest. When approached for comment‚ Govindsamy shook his head. He was immediately whisked away by a family member into the courthouse.

Following Pillay's court appearance a close relative‚ who did not want to be named‚ told reporters that Govindsamy was devastated because his entire family had been taken from him.