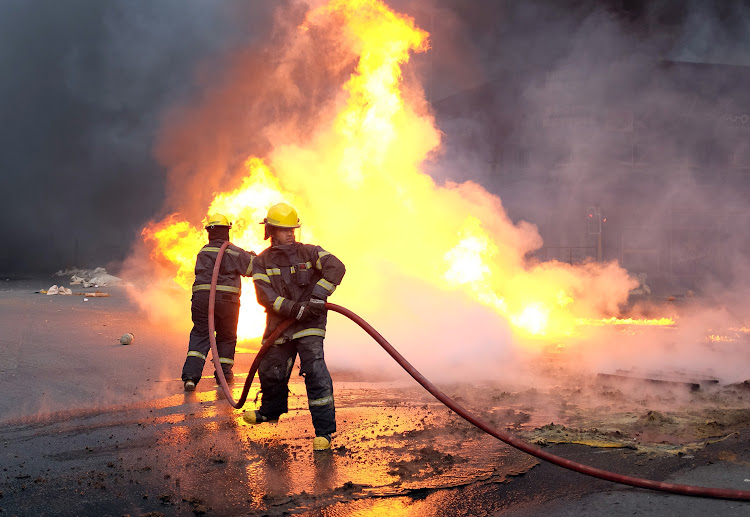 Ekurhuleni has put 48 female firefighters on suspension after they protested about their working conditions and the payment of shift allowances.

The female firefighters demonstrated in Pretoria two weeks ago complaining about conditions of service in the city, including having to work more than eight hours a day.

Ekurhuleni has accused them of bringing the metro into disrepute.

“They participated in an illegal march to the Union Buildings in Pretoria in full City of Ekurhuleni Emergency Services uniform, thus putting the name of the employer into disrepute,” said Ekurhuleni spokesperson Themba Gadebe on Monday.

Arthur Mbonani, a shop-steward from the SA Municipal Workers Union (Samwu) in Ekurhuleni, said the workers attended an event organised by the metro during Women’s Month.

“It was there that the workers spoke among themselves about their work conditions.

Mbonani said the workers decided on their own to go to the Union Buildings in order to raise their issues due to frustrations they have had about nonpayment of extra shifts and allowances.

“Their complaints were that they need to be paid certain allowances which they believe in terms of the conditions of service, they are entitled to – night shift and danger allowances and for extra hours that they work daily,” he said.

“As essential services they work extra hours than the normal hours that are in the [Basic Conditions of Employment] Act.

“Those hours should be regarded as overtime and should be paid as such.”

“They were sent to their deaths.” This was the consensus by former city fire officers.
News
3 years ago

Was water pressure a problem for Joburg firefighters?

Efforts to put out a fire in a high-rise office block occupied by government workers in Johannesburg’s CBD on Wednesday were hampered by a lack of ...
News
3 years ago

He said firefighters in the city worked for 11 hours during the day and 13 hours when on duty at night as opposed to the normal eight hours.

Mbonani said the workers wanted the city to pay for the extra three hours on the day shift and five hours on the night shift as overtime.

He said this was an issue that Samwu had been trying to resolve with the employer for some time.

“It is the plight of all firefighters . It has been raised by all of them, a long time ago through us, Samwu, and we are still engaging [employers] on it,” he said.

Despite having 48 female firefighters off duty, Gadebe said that would not affect the Ekurhuleni Disaster and Emergency Management Services as the suspended group only represented a mere 0.05% of the total workforce.

But Samwu said it would challenge the employer.

Samwu’s regional secretary Thokozani Nkosi said: “The main thing is that they were suspended for demonstrating wearing uniform …which we are challenging as the union.”