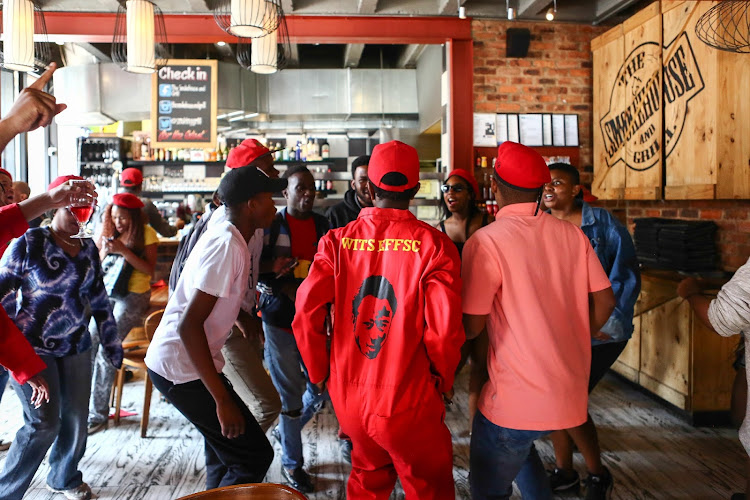 Members of the Economic Freedom Fighters protest inside the Smokehouse and Grill in Braamfontein, Johannesburg.
Image: Moeletsi Mabe

About 30 members of the Economic Freedom Fighters demonstrated inside the Smokehouse and Grill restaurant in Braamfontein‚ Johannesburg‚ on Thursday — demanding that the restaurant apologise for the racist behaviour of one of its former directors‚ Adam Catzavelos.

EFF Johannesburg Ward 60 chairman Cassius Mabunda told the manager of the restaurant‚ Steven Ford‚ that the party wanted an apology to all black workers who were being continually mistreated by white people.

It was not immediately clear whether he was specifically accusing the Smokehouse and Grill of mistreating its workers.

Catzavelos has become a notorious figure after a video went viral last month of him using the k-word to celebrate the fact that there were no black people around him on a beach holiday.

Following the release of the video‚ his family released a statement stating that Catzavelos had no operational involvement in the family business‚ and that his passive 25% share was being unwound. The Smokehouse and Grill fell under the family’s business operations.

Nic Catzavelos said on Monday that a racist video shared by his younger brother had “ripped apart” the family.
News
3 years ago

Mabunda on Thursday also demanded that employers be paid a wage not less than R4‚500 a month.

Ford explained to the assembled demonstrators that he was not a director or owner of the company.

“Since the incident‚ previous directors have resigned out of the shop and have gone out completely‚” Ford told the demonstrators‚ who were not happy with his explanation.

Following a brief discussion‚ the EFF and Ford agreed that the new owners should meet the EFF on Friday morning to address the party’s demand.

Speaking after the demonstrators had left‚ Ford said Catzavelos had never been operationally involved in the restaurant.

“Following the incident‚ Adam’s brother‚ Nic‚ announced the family has relinquished the family’s shareholding in the business‚” Ford said.

One of the employees of the restaurant‚ Leo Muimbu‚ said that the restaurant had closed for a week after the video was circulated.

“Nic came here and apologised to us and said he was sorry for what his brother did‚” Muimbu said.

He said business had been slow since the release of the video.