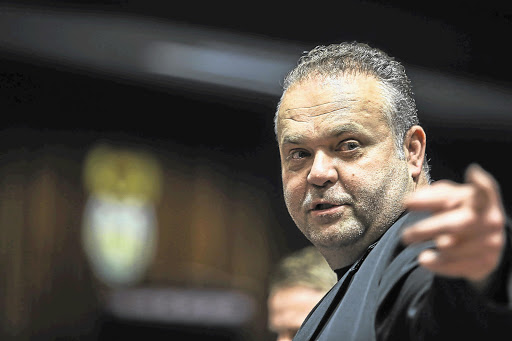 Convicted Czech criminal Radovan Krejcir snuck “contraband” into his cell at Leeuwkop prison‚ allowing him to do a telephonic interview with a radio station last week.

Department of Correctional Services spokesman Singabakho Nxumalo told this publication on Monday night that there was an obvious “security breach” that allowed the media interview to take place.

Krejcir claimed in the interview that there was a conspiracy to keep him behind bars. He said it started after he paid R2.5-million to the son of a high-profile politician in 2011.

He said he paid the money after he was promised that he would get help in obtaining asylum papers‚ but the relationship soured‚ leading to several people‚ including police officials‚ framing him for crimes he did not commit.

Jail's short on Krejcir comforts‚ and Radovan's bawling about it

The Correctional Services Department is "forcing" convicted mobster Radovan Krejcir to eat "African" food - and he is not liking it one bit.
News
3 years ago

In August 2015‚ Judge Colin Lamont convicted Krejcir and others of crimes‚ including kidnapping and attempted murder.

Nxumalo told this publication: “There was a security breach as a cellphone‚ plus a SIM card‚ was confiscated in the inmate’s cell. These items are classified as contraband and not allowed inside correctional centres.”

He said that a task team had been appointed to “investigate the matter fully”.

“This will determine the circumstances under which the inmate was able to secure the contraband‚” he said.

Nxumalo added that correctional services would be making contact with Talk Radio 702‚ which broadcast the interview‚ to seek further cooperation.

“In the interim‚ a senior manager has been appointed by head office to oversee operations [at Leeuwkop] until further notice‚” he said.